Christina Sirisena on veganism and The Vegan Project Sri Lanka

Christina Sirisena has been an active vegan and vegan lifestyle advocate for the last four years. Making the shift to becoming a vegan in 2016 while visiting the UK, Christina has over the years become adept at living life as a vegan.

The Sunday Morning Brunch caught up with Christina to learn more about her upcoming initiative “The Vegan Project Sri Lanka” as well as being vegan and the vegan lifestyle.

Christina defines veganism as a way of life. While most people think of veganism simply as a diet, it is much more than that – it is a sustainable and humane way of living. For animal lovers in particular, going vegan is the most natural and logical shift to make.
Speaking on her position as an advocate for veganism, Christina explained: “I’m not trying to convert anyone; my goal and aim is to let people figure it out for themselves through awareness and information.”

In a more technical sense, veganism is the practice of abstaining from the use of animal products in your diet and daily lifestyle. In terms of diet, this means cutting out meat, fish, eggs, dairy, honey (since it’s a product of bees), ghee (clarified butter), and any other product made with animal involvement.
Being vegan also means stepping away from products and systems that use animals in their makings like leather and fur. This is sometimes easier said than done, though. On a personal level, Christina shared that she has not yet been successful in being vegan in all aspects of her life, although this is something she is working on, and with more vegan-friendly brands entering the market every day, this is becoming much easier to achieve.

Managing the diet is a very controllable way of becoming vegan, and you must start being more aware and humane of your impact. Vegan diets focus on a mix of nutrient-rich plant-based foods like fruits, vegetables, soy, tofu, nuts, seeds, alternatives to honey such as jaggery and kitul, lentils, and whole grains. On the whole, vegan diets tend to be low in saturated fat and cholesterol while being higher in dietary fibre.

Vegan diets have been known to have a myriad of benefits like increased weight loss and weight control, lower blood sugar levels, improved kidney function, reduced risk of heart diseases and certain cancers like colorectal cancer, as well as reduced pain from conditions like arthritis.

However, there are also some risk factors associated with going vegan. If done carelessly, vegan diets can lead to deficiencies in vitamin D, calcium, omega-3 fatty acids, and zinc. These deficiencies can lead to a weakened immune system as well as pose a higher risk of experiencing bone fractures, high blood pressure, rashes, and/or fatigue.

Being vegan in Sri Lanka

Reflecting on the need for veganism, Christina commented that she doesn’t believe humans need to eat animal products and that there are plenty of plant-based options available, particularly in this day and age, that do not harm or exploit animals.

Becoming vegan was a rather organic choice for Christina. Even before becoming vegan, she was not very fond of meat, mainly consuming chicken and prawns infrequently. On her visit to the UK in 2016, Christina decided to challenge herself and go vegan, and once having tried out being vegan for a few weeks, she felt a remarkable difference in how she felt and has stuck to being vegan ever since. She also watched some documentaries when she first became vegan that changed her worldview and made her commit to being vegan. As an avid animal lover, going vegan also made her feel better knowing that at least on an individual level, she was not contributing to the mistreatment and slaughter of animals.

On being vegan in Sri Lanka, Christina shared that local cuisine is actually very easily adaptable to being vegan as there’s minimal adapting needed. “Look at rice and curry; vegetable curries are made without meat or dairy, using coconut milk. Even Maldivian fish is not frequently used anymore. Most vegetarian rice and curry meals are vegan.”

The conception that becoming vegan requires a drastic shift to your diet is not always true. In the case of particular diets, this is so; Christina explained that Italian food, for example, can be complicated because of its dependence on eggs and dairy (eggs in pasta, dairy in sauces and cheeses) as well as meat. But plenty of other cuisines can be adapted to becoming vegan quite easily – like Chinese food and Thai food – and can often be made vegan by omitting one or two ingredients – for example, preparing a vegetable fried rice minus the egg.

The emergence of more restaurants, cafes, and food businesses that cater to vegan diets also makes being vegan in Sri Lanka much easier, which is a big improvement from four years ago when vegan-friendly options were few and far between, she shared. Many restaurants today offer vegan-friendly options for specific dishes. Awareness of the vegan diet is much greater now, particularly Down South, although this is largely due to the large number of surfing and yoga establishments that are frequented by expats who are more likely to be vegan.

Dealing with misconceptions around veganism

There are many misconceptions around being vegan, one of which is that it is a trend followed by those looking to “make a statement”, to which Christina responded saying that if one really looks at veganism and why people should be vegan, the argument doesn’t make sense because the need to go vegan is actually quite logical.

The necessity for protein in the human diet is also a big point of discussion, as veganism moves away from animal protein completely. However, Christina explained that there are lots of alternative protein sources in plants and that the animals we eat for protein are herbivorous and build this protein through plants alone; while the human system is different, protein is not a problem in the vegan diet when handled properly.

A lack of other nutrients like vitamins is also cited as a drawback of vegan diets. Christina commented that in the case of vitamins such as B-12, it can sometimes be necessary to take supplements, but only because these vitamins are generally found on the outside of plants and then eaten and absorbed by bacteria in animals who are then slaughtered. For human consumption, through washing and cleaning, many of these nutrients are washed away, making it necessary to take supplements in specific cases.
Christina also addressed the potential arguments for veganism being damaging to the environment because of increased reliance on soy-based products and similar harmful farming. She explained that these arguments don’t hold weight when considering that cattle are one of the largest contributors to the greenhouse effect because of the amount of gas they produce through digestion and excretion. Cattle farming is also the biggest cause of deforestation across the world, thus adversely affecting the environment and global climate. 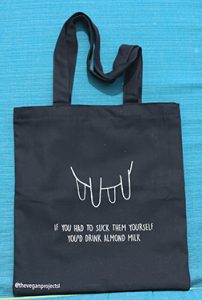 The Vegan Project Sri Lanka is an apparel and lifestyle brand headed and run by Christina (for the moment, it is a one-woman army). Starting small, she will be launching a small range of t-shirts, tote bags, and caps that feature slogans related to veganism and animal rights.
The proceeds from The Vegan Project Sri Lanka will go towards freeing animals from slaughter.

Christina hopes to do this by visiting slaughterhouses and negotiating the release of livestock as well as working with temples to release animals.

Working entirely independently, Christina will re-home these animals with the support of friends who have estates and also within the network of temples to provide safe environments for freed animals with regular follow-up visits to make sure the animals are being cared for properly.

The Vegan Project Sri Lanka is not just for vegans, but also for animal lovers and those interested in the cause as well.

Building change by leading through example

Christina shared that there are lots of arguments in favour of being vegan. Again, it is a natural choice for those who care about their bodies and also about animals and animal welfare.
She shared that we as humans tend to “block the connection between what we see on our plate and the animals we see on the road and in the field. Once you really think about it and learn about how these animals are treated in slaughterhouses, you see that there is nothing humane about it as well as how unnecessary it is”.

Through The Vegan Project Sri Lanka and her own life as a vegan and veganism advocate, Christina hopes to bring change and help build a more humane world.

February 4, 2021 byNews Admin No Comments
Sharmini Seneviratne is the founder of Silk Wraps, a collection of designer evening wear. Seneviratne, the oldest from a family of three, discovered her passion for designing when growing up..

‘Take baby steps’: Indi Yapa talks about her most recent recognitions and more

February 11, 2021 byNews Admin No Comments
Forging the way to remarkable milestones, House of Indi, a leading fashion destination in Sri Lanka, and its Founder and Creative Director Indeevari “Indi” Yapa Abeywardena, has been duly recognised..