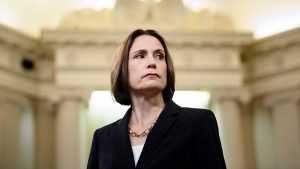 US President Donald Trump disregarded senior advisers and pushed a false theory that Ukraine meddled in the 2016 election, an ex-White House aide has told the impeachment inquiry.

Fiona Hill said the president had instead listened to the views of his personal lawyer, Rudy Giuliani.

Hill called the claims about Ukraine a “fictional narrative”.

The inquiry is assessing if Trump withheld aid to pressure Ukraine to investigate a political rival.

It is illegal in the US to seek foreign help to gain electoral advantage. Trump denies any wrongdoing.

According to a discredited theory, it was Ukrainians or individuals with Ukrainian connections who interfered in the 2016 vote, rather than Russia.

In a phone call with the Ukrainian president, President Trump urged him to look into the claims as well as open an investigation into Joe Biden, one of the main Democratic presidential candidates.

Thursday was the fifth and last scheduled day of public hearings by the House Intelligence Committee.

Concluding the proceedings, inquiry chairman Democrat Adam Schiff said  Trump’s conduct was far more serious than anything done by President Richard Nixon during the Watergate scandal in the 1970s.

“What we’ve seen here is far more serious than a third-rate burglary of the Democratic headquarters,” he said.

IS group names Abu Ibrahim al-Hashemi as its new Leader

November 1, 2019 byTSM Web Desk No Comments
The jihadist group Islamic State (IS) has for the first time confirmed the death of its leader, Abu Bakr al-Baghdadi, and named his successor.