Polling for the general election to appoint the ninth Parliament of Sri Lanka ended at 5 p.m. yesterday (5).

In comparison to the previous elections, the incidents relating to violation of election regulations and violence against political party offices and candidates had been less, the election monitoring bodies observed.

Between the period 6 a.m. and 2 p.m. yesterday, the Election Commission (EC) recorded a total of 758 violations of laws, while the People’s Action for a Free and Fair Election (PAFFREL) recorded 143 complaints/incidents in relation to 147 electoral law/general law violations between 7 a.m. and 5 p.m.

The Campaign for Free and Fair Elections (CaFFE) had deployed 2,200 poll monitors including 80 mobile observation vehicles in all electoral districts. 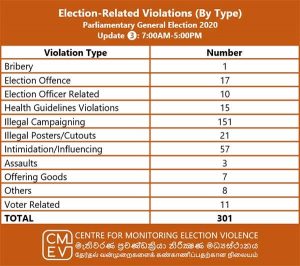 The CMEV recorded a total of 301 election-related violations up to 5 p.m. yesterday, out of which the highest incidents were relating to illegal campaigning which stood at 151 incidents, while incidents of intimidation and influence (57) and illegal posters/cutouts (21) were also prominent.

The scattering of chits bearing party symbols and candidate preferential numbers is by far the most common election violation committed by candidates from a range of political parties across the country, that the observer noted.

According to CMEV monitors, the highest number of election-related violations committed by a political party was 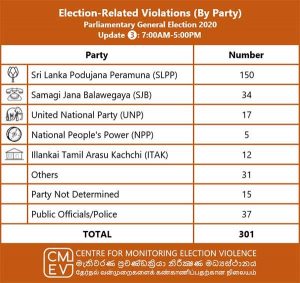 Meanwhile, The Morning spoke to some of the election monitoring bodies that were involved during this general election, to inquire about their overall perception of the polls that were held yesterday.

“There was an incident in Matara where the names of spouses had been mixed in their polling card, the husband’s identity card had been printed on the wife’s polling card, and vice versa. They had only noticed it when they had gone to cast their votes. They were later allowed to vote after the SPO (Senior Presiding Officer) noted the misprint in the observation form.

Further, a lady from Wellawaya who had a temporary identity card was not allowed to exercise her voting rights and our observer had to mediate and inform the Election Commission, after which she was allowed to cast her vote,” she noted.

There were several incidents where candidates and supporters attempted to influence the voters by the use of fear mongering or bribery, tarnishing the voters’ confidence in these candidates.

Meanwhile, National Polls Observation Centre National Organiser Rasanga Harischandra noted: “Strong regulations should be introduced over social media campaigning. We observed a surge of promoted posts from political parties and candidate pages being boosted during the silent period. The facebook ad campaign report had indicated that the total ad expenditure for the general election in Sri Lanka had amounted to $ 500,000.”

Even state media displayed somewhat of a bias when allocating air time for some candidates representing the main political parties. This was more visible through three private media channels, which had allegedly given ad spaces for free to certain candidates of their choice, Harischandra added.

Centre for Monitoring Election Violence (CMEV) National Co-ordinator Manjula Gajanayake, speaking to The Morning, noted: “All in all, the Election Commission of Sri Lanka did an exemplary job in ensuring that the majority of polling stations followed the health guidelines that were stipulated to prevent the spread of Covid-19. Our observers reported that overall the situation had been satisfactory in most of the electorates. Even the duty officers had been very co-operative to make sure that the guidelines were followed to the best of their abilities,” Gajanayake noted.

The CMEV believes that campaign financing and social media campaigning are two aspects that need to be heavily regulated to ensure that future elections would provide a level playing field to all candidates. 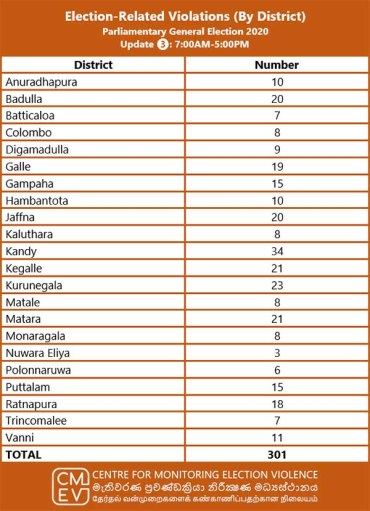 In a statement released to the media, JJB Kurunegala District candidate Namal Karunaratne noted that the behaviour displayed by the Prime Minister had violated the election regulations and had jeopardised the voters’ right to vote in a free and fair manner.

Samagi Jana Balawegaya Permanent Representative Keerthi Tennakoon, releasing a statement, had requested that the election be held again on a different day for the two polling stations that were disturbed by the Prime Minister’s motorcade.

Commenting on the Nikaweratiya incident, Gajanayake said that the candidate in question had used a motorcade of 12 vehicles which had about 50 of his supporters roaming in a motorcade and disrupting traffic flow in the Nikaweratiya area. The incident had been reported when a CMEV long-term observer had spotted the motorcade at the Kobeigane area.

“According to election regulations, a candidate can only use one vehicle with stickers displaying the candidate’s number and symbol. However, the regulations prohibit a procession of such a large number of vehicles, which can be seen as a violation of the calmness of the election.”

Gajanayake also noted that according to their on-ground observers, the group never entered a polling station, and as such, they did not disrupt the polling that took place inside the said polling stations.

June 7, 2021 byMihi Perera No Comments
Seventeen people have died due to the adverse weather conditions prevailing in several parts of the island, the Disaster Management Center stated today.

Price of a loaf of bread increased