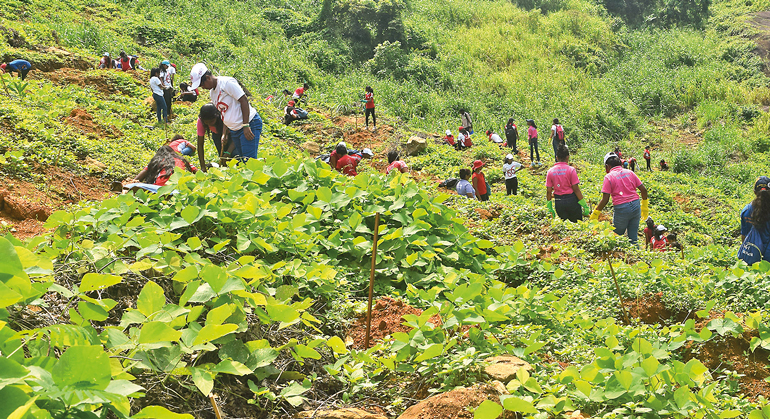 On 14 September 2019, a large group of people from Colombo gathered in Kegalle to donate their time to the cause of improving creation. They gathered that day to plant 11,000 trees in order to tackle the effects of deforestation and aid in bringing nature to its former glory in their own small way. Together, they made a mark on Sri Lanka, making our island’s environment at least a little bit better. The event was organised by the Church of Ceylon’s Diocese of Colombo, a group of people eager to put an end to the destruction being caused to the planet Earth, their home.

It all began when Kumar Abraham came back to Sri Lanka after spending 28 years abroad. He had always been a man who was extremely fond of nature, especially trees, and has often thought of trees as though they were human beings. He believes that like human beings, trees too deserve honour and respect and their population must be multiplied, not decreased. He believes that as man is bound with a duty to improve God’s creation, he has a duty to improve the state of nature. Hence, when he saw the extent of the destruction happening on Earth, he wanted to do all he could to make it right.

He had been sitting on the idea for a long time when suddenly, one day at church, their reverend priest, Fr. Niroshan asked the congregation if they had any resolutions. Abraham was overjoyed to be able to share his ideas with the people, that he believed he has a true responsibility to the wellbeing of the planet. “It is really all the doing of God,” he said, as it is not often that a priest asks the local congregation for resolutions to present to the main Diocesan Council in Colombo. So, he jumped at the opportunity and told Fr. Niroshan all about his idea of planting an entire forest in a deserted location in Sri Lanka. Fr. Niroshan, he said, was more than ready to join the initiative and agreed wholeheartedly to second the resolution when it would be presented to the council by Abraham. When this was done, Abraham joyously said that it was unanimously approved by the entire council in October 2017. Permission from the council was all he needed to dedicate himself entirely to the project. Now, however, it is not simply him alone, but a whole group of devoted members from the Church of Ceylon.

Together, spearheaded by Abraham and Fr. Niroshan, the team set about looking for ways to make their dream a reality. Firstly, they went to the Forest Department of the Sri Lankan Government and spoke to the authorities there.

However, they were unable to provide any form of help as they knew of no free, available land in the Wet Zone the team could plant the trees. Therefore, they decided to move onto the private sector and find a company that would be able to aid them. Although they attempted negotiations a few times, most of it was to no avail until finally, Abraham was able to connect with Hayleys Plantations. Then, right in front of him, a deal was made to inspect a plot of land in Kegalle.

Following this, the team went to this land and was stunned by the sheer size of it. Abraham explained: “It seemed like it was an airport.”

One thing led to another, and soon, the members of the Diocese of Colombo were singing an agreement with a company to use their land to reforest Sri Lanka. They were also able to secure a large amount of funds – around Rs. 5 million – and Abraham is still astounded at how they managed to collect so much money with no donations from a single corporate company.

Finally, everything fell into place and all those interested, even those that didn’t belong to the Church of Ceylon, got together to make Abraham’s dream come true. Students from S. Thomas’ College, Ladies College, and Bishop’s College and youth from the Atlantis Group along with many other smaller groups of people were able to gather that day to help in some small way to make our country better. Not one person came back glum or unhappy for, as Abraham said: “Trees are therapeutic. They were created by God for healing.”

‘Learn to live with the virus’: THASL President Sanath Ukwatte

May 29, 2020 byJennifer Anandanayagam No Comments
The Morning Brunch spoke to The Hotels Association of Sri Lanka (THASL) President Sanath Ukwatte, who said that the industry will adhere to social distancing and all other necessary precautions as sti

December 23, 2021 byNews Admin No Comments
Keahra Mudalige on how to style your outfits and more