November 22, 2021 by Dimithri Wijesinghe No Comments

Ratnayake will be speaking on the topic of writing, language, and the many ways in which English has been a passion and a career choice for her. She will also discuss translation and the use of English as a bridge to opportunities and options.

She is a Senior Lecturer in the Department of English Language Teaching at the University of Sri Jayewardenepura. She was awarded the Gratiaen Prize in 2011 for the best work of creative writing in English. Her previous works have been shortlisted for the Gratiaen Prize on two different occasions in the past as well. 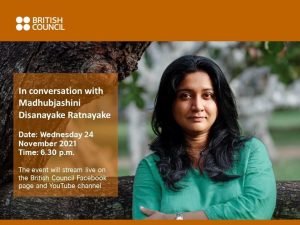 Having recently won the 2020 State Literary Award for her translation of Somaratne Balasuriya’s novel Wap Magula, Ratnayake’s work – the Sinhala-to-English translation named The Sowing Festival – was a 2019 publication. The ever cheerful author shared that she had not a clue that she had actually won the award until she herself was sharing a post on Facebook not even noticing that she was in fact the winner.

“It was quite hilarious actually,” she said, adding that due to the pandemic, the award has been delayed for some time and the authorities probably had enough of waiting.

Speaking about the novel itself, she shared that she felt as though the story demanded to be told, despite it being a tragic tale that is incredibly sad. She shared that it was told so hilariously with perfect sarcasm and it was pretty much a masterpiece. The story tells the culture of the rice farmer providing imagery and ideologies representative of the Sri Lankan power structure – a very telling tale that, despite having been written in the 70s, is very much relevant today.

Ratnayake stated she feels that literature is a much-needed resource in today’s world where the media is often biased and mass broadcasting of select news items that steer the public towards a certain agenda has taken over. She shared that in contrast, literature doesn’t deceive, whereas it tells the truth and what is in people’s hearts.

She also said that there is an unfortunate divide caused by language barriers and that she has always felt it is important to bridge those gaps. To facilitate this is what she hopes to do with her translations, and she even recently conducted some English language classes in Sinhala, while using a piece of English literature to conduct the lesson during the pandemic.

Ratnayake noted that at the upcoming session on Wednesday, she hopes to share her passion for language and the importance of learning and sharing.

January 1, 2021 byNethmi Liyanapathirana No Comments
2021 is here, and whether the pandemic leaves us this year or not, the last year has taught all of us valuable lessons. We spoke to a few well-known faces and asked them what the most important lesson