“Sport psychology is about understanding the performance, mental processes, and wellbeing of people in sporting settings, taking into account psychological theory and methods.” – Meijen, 2019

Sports psychology is now widely accepted as offering a crucial edge over competitors. And while essential for continuing high performance in elite athletes, it also provides insights into optimising functioning in areas of our lives beyond sports. 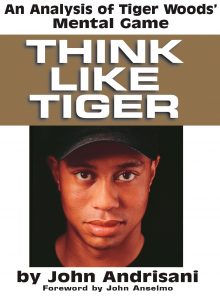 Revealing the secrets that Tiger Woods has learned from his family, fellow competitors, and teachers about the significant mental game of golf, this book written by John Andrisani was out in April 2002. It shows readers how to use these same tools and techniques to improve your own game

As a result, psychological processes and mental wellbeing have become increasingly recognised as vital to consistently high degrees of sporting performance for athletes at all levels where the individual is serious about pushing their limits, says positivepsychology.

Indeed, as cognitive scientist Massimiliano Cappuccio (2018) writes, “physical training and exercise are not sufficient to excel in competition.” Instead, key elements of the athlete’s mental preparation must be “perfectly tuned for the challenge.”

For example, in recent research attempting to understand endurance limits, psychological variables have been confirmed as the deciding factor in ceasing effort rather than muscular fatigue (Meijen, 2019). The brain literally limits the body.

Beyond endurance, mental processes are equally crucial in other aspects of sporting success, such as maintaining focus, overcoming injury, dealing with failure, and handling success.

As psychologists, we can help competitors enhance their performance by providing advice on how to be their best when it matters most.

Most top-level athletes and sportspeople recognise the vital role their mind has in performing at the top of their game.

As long ago as 2008, Tiger Woods confirmed the importance of his mental strength and ability to push himself from within:

And golf experts agree. While Tiger Woods’s natural gifts are self-evident, you can never count him out when he is losing, because of his robust mindset. He is always prepared and always has a plan.

Not the ideal preparation: Mickey Arthur

December 22, 2020 byNethmi Liyanapathirana No Comments
Playing league cricket on batting wickets was “not the most ideal” preparation he could have preferred before the important South Africa Test series, Sri Lanka Head Coach Mickey Arthur told the media.

January 31, 2019 byRevatha No Comments
If Lakmal ruled out Chamika Karunaratne, who only arrived in Australia on Wednesday, is likely to make his international cricket debut.