Sudat Pasqual Column – Increase in the number of teams is needed 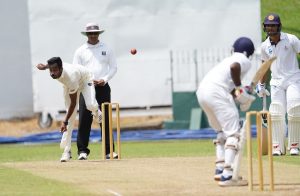 Today, there are 26 teams competing in Sri Lanka’s premier tournaments

If a person deposits a $ into a piggy bank every time we’re told by experts that the increase in the number of teams playing in Sri Lanka’s 1st class circuit has diluted the quality of the game, that person will have a fairly significant number of $s in quick time.

Add another $ each time experts tell us that the increase of 1st class teams diminishes the competitiveness of domestic cricket, the collection in the piggy bank will increase by a significant amount.

Towards a meaningful discussion

If another $ is added each time those experts tell us that the quality of school cricket has decreased in the last few decades, the owner of the piggy bank is likely to need a much larger piggy bank to store the $s.

In order to be meaningful, the discussion must explore the reasons for the increase in the number of teams playing 1st class cricket, school cricket and the correlation between competitiveness and success at the international level.

This article will limit itself to exploring the domestic club cricket circuit.

Some cricket influencers have argued that Sri Lanka’s diminishing returns at the international level is largely resultant of too many club teams diluting the quality of competition. During the first decade of Test cricket Sri Lanka had 8-10 teams playing at the premier level and until 1988 the number of first-class matches were limited to the Robert Senanayake Trophy and matches against visiting teams and one-off matches such as the Gopalan Trophy encounter against Tamil Nadu.

A look-back at SL domestic tournament

To recap, between 1976-90 the top domestic tournaments were won by four teams though between 8-10 teams participated. Those numbers suggest the teams were not evenly matched and the national team more often than not consisted of players selected from a few clubs.

Today, there are 26 teams competing in Sri Lanka’s premier tournaments. That is almost a threefold increase in the number of teams since the 80’s and the 90’s. In the same period, the number of schools playing 1st XI cricket also increased exponentially. Today, around 130 schools are involved in the 1st XI circuit (Division I, II and III). If we accept that each participating school will have a squad of 15 players, each season around 2000 school children play 1st XI cricket.

In the 1980’s, cricket in Sri Lanka didn’t offer those playing a path to make a living. The same was true for the first half of the 1990s. Then came the rapid commercialization of the sport that changed the nature of the game and cricket became a massive income generator. Sri Lanka’s 1996 World Cup triumph was affirmation that the country belonged with the perennial powerhouses like Australia, the West Indies, India and England.

Post 1996 saw a huge boom in the popularity of cricket in SL and children dreamed of playing cricket and repeating the deeds of the 1996 World Cup champs. So, what we see today in terms of the increase in the number of teams playing premier cricket should not be considered an aberrant outcome. In reality, the increase is the result of the massive increase in the popularity of the game. A system that churns close to 2000 schoolboy cricketers annually cannot sustain itself with ten club teams. Ten teams will use the services of 150-200 players. Such a small number is woefully inadequate to serve the needs of Sri Lanka’s cricketing youth.

Sri Lanka’s performance at the international stage is beset with inconsistency. That inconsistency is the result of many factors including the inadequacy of the local tournament format. Largesse of the format is required to absorb the expectations of the next generation of cricketers. Therefore, we need to find ways to overcome the shortcomings of the system that fall short of reducing the number of teams.

Changes to be driven by data, not on whimsies

One approach would be to allow players more time to hone their skills in the domestic circuit before being exposed to international competition. Another would be to blood newcomers gradually instead of throwing them into the deep-end of international cricket. Also, the tournament format could be tweaked to offer platforms for top performers to compete against each other that would sharpen their skills.

Decision makers at Sri Lanka Cricket must weigh in all of the above and more before embarking on a path of wholesale structural change. Changes to existing structures must be carefully thought out and driven by local data, not on whimsies.

April 27, 2021 byRevatha No Comments
Looking at the ever hot European football scene