India bundled out for 92 in ODI 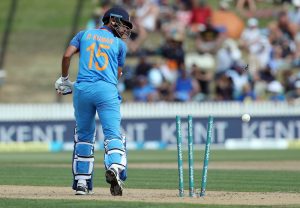 Trent Boult bowled 10 overs on the trot, taking 5/21 in a spectacular display of swing bowling. He helped dismiss India for 92 and set up an eight-wicket win for New Zealand in the fourth one-day international.

Boult ran through the visitors’ batting, which was missing both Virat Kohli and MS Dhoni, and combined with Colin de Grandhomme (3/26) to bowl them out in 30.5 overs in Hamilton on Thursday, 31 January. It was India’s second-lowest total against New Zealand and their seventh lowest in ODIs.

The hosts then strolled home in just 14.4 overs, picking up their first win in the series to make it 3-1.

After Williamson put the visitors in, Boult and Colin de Grandhomme rattled the Indian top order with the swinging ball. The opening duo of Rohit Sharma – standing in as captain in his 200th ODI – and Shikhar Dhawan was separated in the sixth over when Boult trapped Dhawan leg before wicket. Sharma followed soon, hitting one back to Boult in the eighth over to reduce India to 23/2.

Shubman Gill, handed his ODI debut in Kohli’s absence, had the repair work to do in his very first international match. But, he found little support from the middle order.

De Grandhomme – also bowling an unbroken spell – tempted Rayudu (0) to drive uppishly to a wide delivery outside off stump, only as far as Martin Guptill’s outstretched hands at short cover. He then got Dinesh Karthik caught behind for a duck and India were in all sorts of trouble.

Gill, who had faced 20 balls for nine runs with one boundary, didn’t have it easy, especially against the pace and swing of Boult. Like Sharma, he too lobbed a catch back to the left-arm bowler.

India were 33/5 at one stage and it looked like their unwanted record for lowest ODI total of 54 would be challenged. Hardik Pandya, though, hit Boult for three boundaries in an over to save India from the ignominy.

But this was not before Bhuvneshwar Kumar was bowled by de Grandhomme and Kedar Jadhav unsuccessfully reviewed an lbw decision against him. Pandya’s stay too was brought to an end by Boult, who strangled the Indian all-rounder down the leg side.

Boult’s five-wicket haul was his fifth in ODIs, putting him level with Richard Hadlee for the most by a New Zealand bowler. He also had four maidens on the day.

Kuldeep Yadav and Chahal led the rescue act, adding 25 runs for the eighth wicket before Yadav tried to slog-sweep Todd Astle, the leg-spinner, and holed out in the deep.

When the last man Khaleel Ahmed was bowled by James Neesham on five, Chahal was left stranded at the other end and India remained eight runs short of the 100-run mark.

Martin Guptill (14) started the New Zealand chase with a six and two fours off the first three balls of the innings. Kumar got the batsman caught at point on the fourth ball, and later had Kane Williamson caught behind, but the bowlers simply did not have enough runs to work with.

Ross Taylor (37*) and Henry Nicholls (30*), who had been promoted to open, ensured there were no hiccups. Taylor’s three sixes against Yuzvendra Chahal put the hosts’ final signature on a dominating performance

The final ODI will be played in Wellington on 3 February.

September 3, 2021 byRevatha No Comments
The sports diary for Friday and Saturday, 3 and 4 September 2021