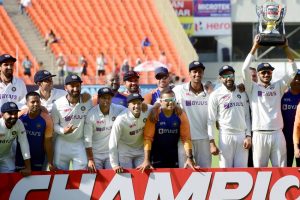 The Indian cricketers bound for England for the World Test Championship (WTC) final will have to undergo two quarantines, the Indo media revealed on Sunday (9).

One will be of eight days here in India. And other will be a ten day quarantine that will be setup in England. Meanwhile they will be able to train in UK based quarantine, in India they will be confining to their rooms.

This and other details have been reported by news agency ANI. It also stated that families of the players will also be allowed.

“You can expect the boys to come into the bubble on 25 May as it will be an eight-day quarantine period which will not just involve testing against Covid-19, but also there will not be any movement as the boys prepare for the UK schedule,” one report said.

Once in UK on 2 June, the boys will go for another 10-day quarantine. But this time the cricketers can train as they are moving from the bubble in India to the bubble in England in a charter plane.

A bubble to bubble move lets them train even though there will be continuous testing at all times and no further movement,” one senior Boar of Control for Cricket in India (BCCI) official explained.

India will be playing five-match Test series which will start from 4 August. This means more than a month between WTC final and Test series opener. This also meant that team will stay in England for more than three months as the series ends on 14 September.

BCCI therefore would like the cricketers to have their families along. “Not just the duration of the tour, the Covid-19 restrictions also mean you cannot move around the place. There will be more than a month’s gap between the Test Championship final and the opening Test against England in Trent Bridge from 4 August. The players will have their families travelling with them,” the official told ANI.

Since some of the cricketers have already got vaccinated, the issue will be when and how to administer the second dose of the vaccine. “The Indian government has opened vaccination for every person above 18 so the players can take their first dose,” he had added.

“But the second dose is the question here and while the BCCI is looking at working closely with the England and Wales Cricket Board to ensure players can get a second dose in the UK, if that is not approved by the UK government, we will have the vaccine taken from India for the second dose. Let’s see how that works out in the coming days,” the official has also said.