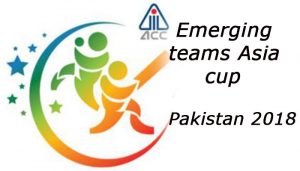 Sri Lanka will co-host the 50-over ‘Emerging Teams Asia Cup 2018’ along with Pakistan, which will have eight teams, competing in two groups, Sri Lanka Cricket announced on Wednesday, 28 November.

The Group ‘A’ of the tournament consists of Sri Lanka, India, Afghanistan and Oman whilst the Group ‘B’ consists Pakistan, Bangladesh, UAE and Hong Kong.

The tournament will kick off with Group ‘B’ games commencing on 6 December in Pakistan, while the matches in Sri Lanka will commence on 7 December.

Meanwhile Indian media reports said on Wednesday that a PCB official confirmed that India will play all their matches in Sri Lanka as the BCCI has denied sending the team to Pakistan.

The Board for Cricket for Control in India (BCCI) has refused to send the Indian team to Pakistan for the upcoming Emerging Nations Cup. Pakistan will get to stage some international cricket after more than a decade since the 2008 terrorist attacks. India will be playing their games in Sri Lanka with the final also scheduled in Colombo.

Bangladesh, UAE and Hong Kong are grouped with Pakistan for the Karachi leg of the tournament while Sri Lanka, India, Afghanistan feature in the other group in Colombo. BCCI’s denial was further illustrated by a PCB official who said India are not ready in any terms and conditions to play in Pakistan again.

“A proper security plan has been prepared for the visiting teams and they will be given top security throughout their stay in Karachi from December 4 to 10,” said the PCB official.

Security of the players has been a very big issue in Pakistan over the past decade with many international players apart from the Indian players have also denied going to the country in the past. Another PCB official on his part said that the Emerging Nations Cup gives Pakistan yet another opportunity to prove that the country is safe enough to play cricket.

The United Arab Emirates has been the adopted home venue since 2009 which over time has brought them decent success in international cricket. India and Pakistan played each other recently in the 2018 Asia Cup in the UAE. Pakistan suffered yet another defeat against India in knockout contests.

The PCB had also filed a compensation case against the BCCI for not honouring the bilateral series contract. It, however, was recently dismissed by the ICC Disputes Resolution Committee.

May 22, 2019 byRandev No Comments
In Sri Lanka's 2nd ODI against Scotland held at the Grange in Edinburgh ahead of the ICC World Cup, the Lankan team emerged victorious by 35 runs (D/L method).