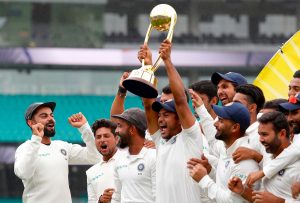 While it wasn’t quite the grandstand 3-1 finish they would have envisaged, it was a series win well deserved as they became the first Asian side to win a Test series in Australia

Seventy-one years after they first toured Australia, India finally have a series win to show.

While it wasn’t quite the grandstand 3-1 finish they would have envisaged, it was a series win well deserved as they became the first Asian side to win a Test series in Australia.

History was celebrated with handshakes at little after 2.30pm on a bleak day where play didn’t look possible at any stage.

This meant they weren’t able to add to the four overs out of the potential 155 they had at Australia to try to get the ten remaining wickets to secure a third win, after enforcing the follow-on with a 322-run lead that was achieved early on the fourth day. Incidentally, Sunday too dawned dark and grey with only 25.2 overs possible.

The situation at times on the final day bordered on the farcical. As the floodlights took effect, Sydney’s Central Business Districts were visible through the thin spray of pitter-patter but the umpires were bound by the rigid ICC guidelines.

The rain may have not been intense enough for the players to go off in the first place. However, with the rules stipulating players can only return once the drizzle stops and light improves to a reading better than the one that forced them off, any hope of play diminished drastically.

Where they should have been out looking to take wickets, the Indian team spent their morning doing photoshoots and some tour filming; not quite the expected end to an intense series where each Test was pushed into the fifth day. The series win meant India became the fifth side after England, West Indies, New Zealand and South Africa to record a Test series win in Australia.

“Hats off to India. When we play in India, we know how difficult it is, so to win in foreign conditions is a huge effort, congratulations to Virat, Ravi and those guys,” said Australia captain Tim Paine. “In the last two Tests, we were a little poor. We thought we had chances to win in Adelaide, but India outplayed us in big moments. In Perth, we played a good brand of cricket, but were completely outplayed in Melbourne and Sydney. India deserved to win.”

Out of the 13 captains to have led India on these shores, Virat Kohli’s two wins on this tour is the joint-most along with Bishan Bedi. This completes a circle of sorts for India, who began their long stretch of overseas tours in January last year with a 2-1 series loss in South Africa.

With a slew of home Tests – outside of the one tour to the Caribbean in July – in the next 12 months, India have a great chance of extending their reign as the No. 1-ranked Test side. For Kohli and India, this Test series will be extra special, for they found the batting support that their bowlers missed in South Africa and during their 4-1 loss in England.

“I’ve never been more proud to be part of a team than this one right here,” said Kohli. “I think the culture we have been able to build over the last 12 months [has been fantastic]. I’m proud to be part of this team. To lead these players is an honour and privilege. They make a captain look good.”

Kohli, remarkably, was only the third among all batsmen in the series – Cheteshwar Pujara and Rishabh Pant finished ahead of him with 521 and 350 runs respectively. In comparison to the 2014-15 tour, where he scored 692 runs, Kohli’s tally of 282 seemed pale, but his century in Perth on a fiery track – albeit in a losing cause – was an act for the most top batsmen to emulate.

In the end, the series scoreline was 2-1, with Australia’s Perth win sandwiched between India’s triumphs in Adelaide and Melbourne. Both sides will now square off in three ODIs to round-off a tour that began with the T20I series locked 1-1, with the second T20I in Melbourne ending in no result because of rain.

October 15, 2021 byRevatha No Comments
The five-match series kicks off at Dambulla

Will there be a blackout? – West Indies’ TV rights still not sold for Asia!

March 1, 2021 byRevatha No Comments
There is a possibility that there'll be no live telecast of WI series here