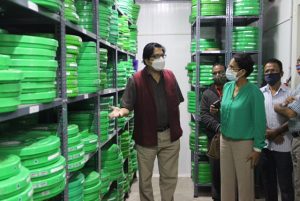 The National Film Archive of India (NFAI) in Pune is ready to preserve 20-30 Sri Lankan movies in their archiving Facility, the Consulate General of Sri Lanka in Mumbai said yesterday.
Following the discussions held between Consul General Chamari Rodrigo and Head of the NFAI Prakash Magdum in December 2020 regarding possible collaboration between India and Sri Lanka in the area of film archiving and restoration, the NFAI would collaborate in archiving 20-30 Sri Lankan movies.
The NFAI which is mandated for preserving Indian cinematic heritage also collaborates with National and International institutions to promote world cinema.
The NFAI has 27 storage vaults of different sizes and the total capacity for restoration is 200,000 reels with separate facilities for colour / black and white films.
Currently, the NFAI is in the process of building a new facility that will cater to both celluloid and digital films which will be ready within 18 months.
Given the importance of film restoration, NFAI is undertaking a project of digitalizing 5,000 movies in 2 years.
The Consul General also sought their assistance in digitalizing Sri Lankan movies under the ongoing project and technical training on digitalization for Sri Lankan movie makers in view of the modern technology and highly skilled restoration artists in the Institution.
“Sri Lankan Cinema would immensely benefit through this collaboration with NFAI that is one of the best archiving facilities in the world,” the Consulate General said.

January 11, 2021 byRusiru Keppetipola No Comments
Samagi Jana Balawegaya (SJB) and Opposition Leader Sajith Premadasa has said that he pledges to protect the life of MP Harin Fernando at all times, in reference to a letter sent by Fernando to IGP

“Immigrants from other countries have returned to their homelands”, SL expatriate in UAE complain

March 4, 2021 byMihi Perera No Comments
A video has been released by a Sri Lankan expatriate serving in the UAE on social media saying that other immigrants from India, Bangladesh and Philippines have already returned to their countries whi