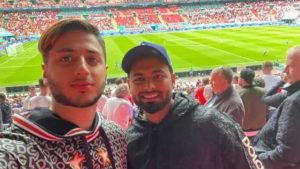 On 29 June, exactly 18 days ago from today, Rishabh Pant was spotted with a friend at a packed Wembley Stadium enjoying the Euro 2020 knock-out match between England and Germany. Photo Twitter

Few weeks earlier, the player was spotted with a friend at a packed Wembley Stadium enjoying the Euro 2020 knock-out match between England and Germany, and it is being reliably learnt that 10 days back, Pant had tested positive, the Indian media reported last week.

“He (Pant) is in quarantine at an acquaintance’s place and won’t be travelling with the team to Durham on Thursday (yesterday),” a Board of Control for Cricket in India (BCCI) source has said, reported the Inside Sport.

The report further stated that Pant has been possibly afflicted by the Delta variant which has led to rising number of cases in England. In fact, Pant has been tested positive over a week now and has been asymptomatic and recovering well.

“Yes, one player has tested positive but he has been in isolation for the last eight days. He was not staying in any hotel with the team, so no other player has been affected. But I can’t divulge the name of the player,” BCCI Vice President Rajiv Shukla had told PTI on Thursday (15).

“As of now no other player has tested positive. Also you must be aware that our (BCCI’s) Secretary Jay Shah has written a letter to all players to maintain protocols,” Shukla had added.

Earlier ANI had reported that two of the 23 Indian cricketers in the ongoing tour of England have tested positive for Covid-19 during the 20-day break and will not be travelling with the team to Durham.

“After Rishabh Pant, a support staff member of the Indian team in England has also tested positive for Covid-19. Three other coaching assistants have been quarantined because of this development. The four, along with Pant, would not be traveling with the team to Durham,” said The Indian Express.

Even the England & Wales Cricket Board (ECB) is worried about the development, reported coming from India further added. The BCCI has passed a message to the Indian team management to reassemble in Durham before Thursday.

The BCCI and ECB are now suspecting that there can be more positive cases in the Indian camp.

It is worth noting that the Indian players, currently on break, were earlier tested on 10 July (Saturday) and again on 14 July (Wednesday). The positive test report of the Indian cricketer is from the 10 July test and the reports for the tests undertaken on Wednesday are yet to be received.

“All players will reassemble in Durham today (yesterday). The player who has been tested positive will stay isolated. We will now not allow players to mingle around till we get reports of the test undertaken on Wednesday,” a BCCI official has told the Inside Sport Thursday morning.

The BCCI and ECB have asked the player who tested positive to stay in home quarantine at his relative’s place. The said player was not to travel to Durham yesterday and will be tested once again in the next 48 hours.

It is worth noting that Indian team is scheduled to play two practice games in Durham. The first three-day match versus Select County XI is scheduled for 20 July.

The player tested positive initially experienced a sore throat after which he tested positive for Covid-19. The concerned player was continuously mingling with few of the team-mates and members of the support staff and this fact is making the BCCI and ECB more worried.

“We have asked team-mates and support staff who came in contact with the player to isolate themselves for next three days. They will travel to Durham but will be asked to get in quarantine. We are just waiting for the reports for their tests undertaken on Tuesday,” a BCCI official has told the Inside Sport.

Cases on the rise in England

Covid cases in England are rising in the past few days. The development in the Indian camp comes days after a number of players in England squad tested positive ahead of their ODI series against Pakistan.

It forced the ECB to send the entire England squad including Captain Eoin Morgan and Joe Root into isolation. A second-string side, led by Ben Stokes, were named to play the three-match ODI series as a replacement.

Earlier Sri Lanka Batting Coach Grant Flower and some Sri Lanka team members had also tested positive for Covid-19 ahead of India’s ODI series against Sri Lanka. Sri Lanka were returning after a limited-over series against England. As a result, the series opener got pushed by five days, to 18 July.

India are set to play a three-day warm-up match starting on 20 July against a County Select XI at Chester-le-Street in Durham. India will use the Riverside Ground “as a home venue for their preparations this summer,” a release from Durham Cricket stated on Wednesday (14).

Indian players were allowed to leave the bio-bubble for 20 days for a break after their World Test Championship Final, held last month, also in England. They will re-enter the bubble ahead of the practice matches starting on 20 July.

“The three-day game will see a number of players from the county circuit feature as they go up against the Indian national side,” the release said.

There will be 90 overs that are scheduled per day with the game being played “strictly behind closed doors” and will be streamed on Durham Cricket’s YouTube channel. The match will help India to prepare for the five-Test series starting on 4 August in Trent Bridge.

May 13, 2022 byNews Admin No Comments
National Olympic Committee (NOC) of Sri Lanka Secretary General Maxwell de Silva was attacked at his home in Colombo, last Friday (6) morning, reportedly over a row related to selections for this year

September 10, 2018 byRevatha No Comments
There will be 36 teams, slotted in four Groups, which will be participating in this year’s Singer Trophy Under-19 Division I inter-schools cricket tournament