India vs. Sri Lanka – A rare series of brotherhood 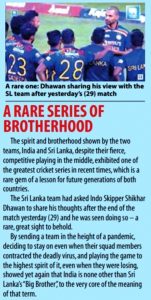 A rare series of brotherhood

The spirit and brotherhood shown by the two teams, India and Sri Lanka, despite their fierce competitive playing in the middle, exhibited one of the greatest cricket series in recent times, which is a rare gem of a lesson for future generations of both countries.

The Lanka team had asked Indo Skipper Shikhar Dhawan to share his thoughts after the end of the match yesterday (29) and he was seen doing so – another rare, great sight to behold.

By sending a team in the height of a pandemic, deciding to stay on even when their squad members got contracted by the deadly virus, and playing the game to the highest spirit of it, even when they were losing, showed yet again that India is none other than Sri Lanka’s “Big Brother”, to the very core of the meaning of that term.

Real Madrid do the double on Barca; Leeds topple City

April 13, 2021 byRevatha No Comments
European soccer highlights of the week