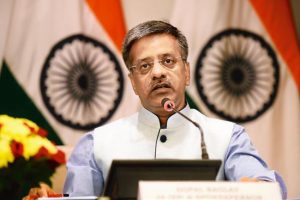 Indian High Commissioner Gopal Baglay has met President Gotabaya Rajapaksa, Prime Minister Mahinda Rajapaksa and Foreign Minister Dinesh Gunawardena on Tuesday after Sri Lanka backed out of the agreement with India and Japan to develop the East Container Terminal (ECT) at the Colombo Port, official sources has told The Hindu.

The thrust of the Indian envoy’s message to the Sri Lankan leadership, sources said, was that Colombo must adhere to its commitments in the tripartite agreement of May 2019, to jointly develop the strategic terminal with the Sri Lanka Ports Authority (SLPA) holding 51 % stakes, and India and Japan, holding 49 % together.

The Adani Group from India, along with Japanese companies, was to invest in the project expected to cost upto $700 million, as per official estimates.

The Indian side, it is learnt, conveyed that the signals emanating from Sri Lanka should boost the confidence of potential investors. President Rajapaksa has pledged to draw foreign direct investments to the country, rather than take loans.

The three high-level meetings follow the Sri Lankan government’s cabinet decision, in the wake of raging protests by port workers’ unions opposed to foreign investment in the facility, that the operation of the ECT would be “100 %” with the SLPA, while the West Container Terminal would be offered to India instead, on a 35-year arrangement for development.

Be vigilant of internet scams on 31 Dec.: Ajith Rohana

December 21, 2020 byMihi Perera No Comments
A group of people representing different religious beliefs gathered to tie white cloths at Borella Cemetery in protest against the cremation of a 20 days old baby died from COVID-19.