Indian Ocean geopolitics : The importance of a non-aligned policy

November 1, 2020 by Skandha Gunasekara No Comments

The recent visit of US Secretary of State Mike Pompeo came with further implications of Sri Lanka’s strategic importance and the need for Sri Lanka to once again adopt a firm, non-aligned foreign policy, or at the very least, look at the “diversification of dependence” on foreign nations. 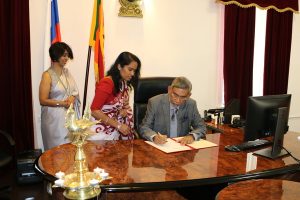 “I’m not one who agrees that the US is primarily concerned with China’s economic influence in and on Sri Lanka. Secretary of State Mike Pompeo’s remarks made it very clear that what they are concerned about most is the vision of the CCP and the expansion or influence of that vision in and on Sri Lanka” Dr. Dayan Jayatilleka

Delving into the issue, The Sunday Morning sought the views of veteran diplomat and academic Dr. Dayan Jayatilleka on how Sri Lanka would need to navigate the treacherous waters of geopolitics in the modern era.

“Sri Lanka has had to balance between contending powers in the past. In 1962, when India and China fought a war, Sri Lanka not only balanced between them, but Madam (Sirimavo) Bandaranaike was able to initiate a process of peace. So, we’ve been here before.”

Expressing his views on Sri Lanka’s current situation, he noted the new power bloc – the Quadrilateral Alliance – and its rival, China.

“Now, we have to look at this matter in terms of not just India and China but also the ‘Quad’; i.e., the Quadrilateral Alliance of the US, India, Japan, and Australia.

“We recently cancelled a contract with Japan for a Light Rail network and one of our state ministers was very critical of Prime Minister (Narendra) Modi on the latter’s statement that we should implement the 13th Amendment.

“When Sri Lanka does that, and at the same time warmly welcomes a member of the politburo of the Chinese Communist Party (CPP), it sends a signal, whether we intend to or not. And that signal is most certainly not one of successful balancing. So, I don’t think we are getting it quite right.”

Where did it go wrong?

Dr. Jayatilleka explained that while Sri Lanka managed to remain non-aligned up until the second term of President Mahinda Rajapaksa, the current Government confusing its foreign policy was a result of ignorance towards the strategic moves in the region by key players such as the US and India.

“The last big successes we had in our foreign policy was during the back-to-back presidencies of President Chandrika Bandaranaike Kumaratunga and the first term of President Mahinda Rajapaksa,” he opined.

“Today, we’re suffering from a degree of confusion, because some members of the Government refer to Sri Lanka’s foreign policy as neutral – President (Gotabaya) Rajapaksa uses the term neutral, Foreign Minister Dinesh Gunawardena uses the terms neutral and non-aligned – so in terms of what our framework is and where we belong, we don’t seem to have one view. That is one of the reasons for our confusion.

“Another reason is that we have not thought through our situation in the Indo-Pacific or the implications of the recent defence agreements between the US and India.”

“The recent agreement I refer to is the fourth foundational agreement signed between the world’s two most powerful democracies, the US and India, which also happen to be the world’s sole superpower and a regional superpower, respectively.”

When The Sunday Morning queried as to how Sri Lanka could continue to remain neutral in its foreign policy without severing ties with one side or the other, Dr. Jayatilleka pointed out that Sri Lanka must first understand the significance of the recent defence agreements between the US and India.

He then went on to say that Sri Lanka must not be disillusioned into assuming that China could provide security, as it could for its neighbouring countries such as Cambodia or Vietnam.

“We have to understand our vulnerability, which is a simple matter of geography. We cannot imitate Myanmar or Cambodia or Pakistan because those countries are either in China’s neighbourhood and share a border with China or are connected overland, as Pakistan is to China through a long overland route.

“Sri Lanka has no such physical connectivity with China and therefore, there is a limit to which the Chinese umbrella can protect us,” he explained.

Ideology and politics matter rather than economic implications?

“We also have to understand that it is very likely there will be a huge change in the US next week; we don’t know which way the election will go, but right now, a change in government looks very probable, which will have enormous consequences on Sri Lanka.”

On the issue of how Sri Lanka could continue to seek financial assistance from China while remaining neutral, Dr. Jayatilleka opined that the “Quad” headed by the US was mainly interested in the ideological influence of its rivals rather than the economic.

“He said there were choices to be made. His primary message was: ‘On one hand you have authoritarianism and tyranny and on the other hand you have democracy and freedom’. So, what the Americans are telling Sri Lanka is: ‘So far, you’ve been a democracy and we hope you can consider yourself and be considered by us as a member of the family of democratic states of Asia.

Lacking in ‘diversification of dependence’

Nevertheless, acknowledging that economic assistance was a pertinent matter in the great game of geopolitics, Dr. Jayatilleka asserted that “diversification of dependence” was essential in ensuring all sides are appeased of Sri Lanka’s neutrality. 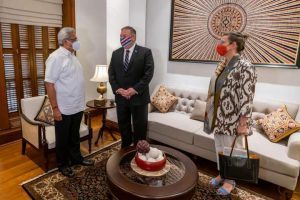 “The second issue is economic, for sure. On that, I think previous Sri Lankan governments – in the 1960s and 1970s – knew the answer to that question.

“A concept very well-known and practiced by Sri Lanka as a member of the Non-Aligned Movement in previous decades was ‘diversification of dependence’. At that time, the countries of the third world, including Sri Lanka, found themselves overly economically dependent on the West. Today, it is the East. But Sri Lanka was not happy, and nor were any of the other third-world countries.

“Therefore, Dr. Gamani Corea, who later became the Secretary General of the United Nations Conference on Trade and Development (UNCTAD), was one of those who put forward the idea of the diversification or diffusion of dependence.

“Sri Lankan policymakers today don’t seem to have heard of this concept because if they had, they would have tried actively to diversify our dependence instead of simply turning to China asking for money, requesting a currency swap from India, etc.

Sri Lanka’s questionable economic policies too play a role, Dr. Jayatilleka said, adding: “The other issue with turning to China all the time is that we first have to get our economic policy right. 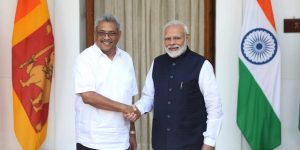 He noted that Sri Lanka’s economic policy had a significant impact on its foreign policy as well as in ensuring sovereignty was not violated, pointing out that Sri Lanka’s recent decision to restrict imports was against expert recommendations.

“The Institute of Policy Studies (IPS) issued a report recently stating that the ban on imports should be a short-term emergency measure and by next year, we should be thinking about a different strategy.

“I think it is necessary to get the best economic brains on a panel, chaired by the President or the Prime Minister, and devise an economic strategy which can deal with these problems without getting Sri Lanka further into debt and sending the wrong signals to the US and India; Japan too is a very important country which has supported Sri Lanka for a long time.”

Nevertheless, the veteran diplomat asserted that Sri Lanka’s sovereignty remaining intact largely depends on tactful diplomacy, which can be achieved by paying close attention to the messages of the countries whose sphere of influence Sri Lanka comes under.

“What Secretary of State Pompeo said will either remain the perspective of the US if President (Donald) Trump wins, or will be enhanced by a Democratic administration. For instance, democracy, liberal democracy, rule of law, human rights, equality, etc. will only be enhanced by a Democratic administration; it will not reverse the message Pompeo sent us today. If we want to protect and defend our sovereignty, we must take seriously the messages countries like the US or India send us.”

Sunny Side Up: Assuming duties via Zoom

August 22, 2021 byNews Admin No Comments
Newly appointed Transport Minister Pavithra Wanniarachchi, it is learnt, had assumed duties in her new ministry via Zoom.

March 7, 2021 byNews Admin No Comments
The United Nations (UN) Core Group of Countries on Sri Lanka will present the amended draft of the resolution on Sri Lanka to the UN Human Rights Council (UNHRC) tomorrow (8) for an informal dialogue,