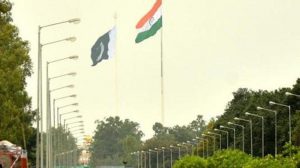 The Sittings of the South Asia Parliamentarian Platform for Children taking place at the Hilton Hotel was briefly halted today due to a heated argument between the Indian and Pakistani delegates over the Kashmir issue.

According to sources, the Pakistani Parliamentary delegation had demanded to know from their Indian counterparts why India had revoked Kashmir’s special status nullifying autonomy granted to the state which had also resulted in numerous schools in the region being closed down.

Subsequently a heated argument had ensued between the two groups, with India asserting that it was an internal Indian issue.

Parliamentarian Professor Ashu Marasinghe had to stop the session for lunch to calm the situation and end the quarrel.

The event was hosted by the United Nations Children’s Fund (UNICEF) in celebration of the 30 year anniversary of the Convention of the Rights of the Child (1989-2019).

Sri Lanka to receive grant from US

April 26, 2019 byRandev No Comments
The Millennium Challenge Corporation (MCC) of the US Government has approved a grant of USD 480 million to Sri Lanka at its Board meeting held on 25 April 2019 in Washington.