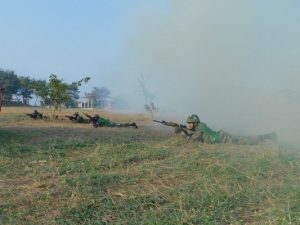 The seventh edition of Exercise Mitra Shakti – 2019 aimed at enhancing interoperability and operational efficiency amongst the armies of the two countries when deployed as part of United Nations peacekeeping forces commenced on December 1 at Aundh Military Station, Pune.

The objective of the exercise is to build and promote positive relations between the Indian and Sri Lankan armies through focus on sub-unit-level training on counter-insurgency and counter-terrorism operations in urban and rural environment under United Nations mandate.

The joint training exercise also signifies the strength of India-Sri Lanka relations in the field of military cooperation and engagement, which is vital for refining the interoperability and operational preparedness.

The joint exercise is designed for incorporating the current dynamics of United Nations peacekeeping operations through practical and comprehensive discussions and tactical exercises.

As member nations of the United Nations, the participating contingents will gain immensely through joint operability and enhanced military and diplomatic association.

Shame, fury and sadness: A Sri Lankan’s view of the New Lynn attack

June 9, 2021 byAazam Ameen No Comments
Foreign Minister Dinesh Gunawardena in a telephone conversation with the Minister of Foreign Affairs of the Russian Federation Sergey Lavrov on Monday (07) expressed his appreciation for the support e