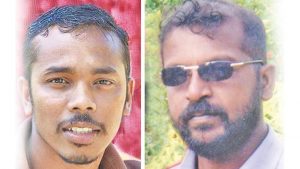 The Appeal Court today issued an interim injunction preventing the summoning of SLPP Presidential candidate Gotabaya Rajapakse on the 27 September by the Jaffna Magistrate’s Court over the Lalith, Kugan disappearance case.

When the case was called on 21st of June 2019,Gothabaya’s lawyer told the Jaffna Court that his client had been admitted to an overseas hospital for treatment and therefore is unable participate in the Court session. Then the Judge issued a summon order to Rajapaksha, to appear before the Court on 27th of September.

Seven years ago, a writ of Habeas Corpus was filed in the Court of Appeal to demand the release of Weeraraj and Muruganandan if they were in the custody of the State. An inquiry into the writ commenced at the Jaffna Magistrate’s Court in September 2012.

Rights and political activists Lalith Kumar Weeraraj and Kugan Muruganandan went missing a day before World Human Rights Day, on 9 December 2011. They were last seen in the Kaitaddy area in Jaffna.

Weeraraj and Muruganandan were laboriously documenting disappearances in the Northern Province during and after the end of the war in 2009, when they went missing without a trace.

All purchases are made in line with procedures, not arbitrarily: Sathosa Chairman

December 6, 2020 byLahiru Pothmulla No Comments
All purchases through Sathosa are made by following a clearly defined procurement framework which was decided by a committee rather than one single individual, Lanka Sathosa Chairman Nushad M Perera s

Karuna unable to appear before CID due to poor health

June 23, 2020 byTSM Web Desk No Comments
Vinayagamoorthy Muralitharan alias Col. Karuna Amman has informed the Criminal Investigation Department (CID) through his lawyers that he is currently unwell and will provide a statement following his