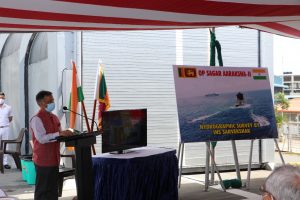 The Hydrographic Survey Ship of the Indian Navy, ‘INS Sarvekshak’, entered Colombo after successful completion of surveys in three areas off Colombo, the High Commission of India in Colombo stated today (02).

Accordingly, the vessel was welcomed at the terminal by Colombo Commander of Western Naval Area RAdm Upul De Silva.

The High Commission stated that the INS Sarvekshak was immediately deployed on request of the Government of Sri Lanka on 23 June 2021 to conduct a survey in the vicinity of the ill-fated MV X-Press Pearl. The joint survey operation was coordinated between Indian Navy, Sri Lanka Navy and National Aquatic Resources Research and Development Agency (NARA).

Speaking at the ceremony, Minister Devananda thanked the Government of India and the Indian Navy in particular for their prompt response and acknowledged India’s vision of Safety and Growth for All In the Region (SAGAR) through this gesture.

Meanwhile, High Commissioner Gopal Baglay highlighted that India and Sri Lanka have cooperated on many occasions for mitigation of maritime disasters. He expressed happiness that as part of Op Sagar Aaraksha 2, he had the opportunity to personally see off the Indian Coast Guard ships and participate in the event to felicitate the survey effort undertaken by INS Sarveshak. He also expressed pride in India’s assistance in restoring the livelihood of the Sri Lankan fishermen along the western coast.

INS Sarvekshak progressed 807 miles of Side Scan Sonar survey utilising integral sensors and two survey boats in adverse weather conditions, which could have otherwise  been delayed to post Monsoon in October due to rough seas. The ship’s team worked overnight to process gigabytes of data collected during the day, to meet the timelines. Post the survey, the ship identified 54 underwater debris and also one ship-wreck. The survey data would be invaluable in issuing advisories to the mariners and fishermen which would later assist in the removal of debris by the Salvour to achieve safety of navigation.

According to the High Commission, the continued assistance to Sri Lanka in the recent maritime incidents has showcased India’s ‘Neighborhood First’ policy through swift and timely support in mitigating various calamities in the Indian Ocean Region.

August 27, 2020 bythemorningeditor1 liberty No Comments
The Parliament Public Gallery will remain closed for visitors until recommendations are received from the health authorities, Sergeant-at-Arms Narendra Fernando said.

Gopal Bagley to be appointed Indian HC to Sri Lanka