Insurance sector to recover from two-year slump next year 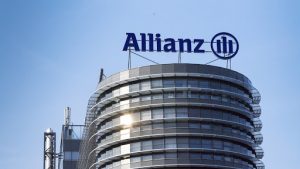 Sri Lanka’s insurance market is set to go from bad, in 2019, to worse, in 2020, but a swift recovery will be seen from 2021 onwards, according to the Allianz Group.

Allianz, one of the world’s leading insurers and asset managers, made this forecast in its latest Global Insurance Report released last week, which charts the course of insurance markets around the world by looking back at last year’s performance and looking ahead at future developments.

It noted that the lack of development in Sri Lanka’s insurance market will help it to achieve higher growth rates.

However, Allianz’s outlook for the local market in the immediate future is bleak, as growth is expected to slow down even further than the five-year low it hit in 2019.

“Sri Lanka’s insurance market already hit a “soft patch” in 2019: Premiums grew by ‘only’ 7.8% (life: 9.9%, property and casualty [P&C]: 5.8%); the weakest growth in five years, after showing double-digit growth in all the four previous years. 2020 will be even more challenging, although Sri Lanka should be one of the few markets in the region to avoid contraction, albeit by a hair’s breadth: Premiums are expected to grow by a meagre 1.7%, dragged down by a decline in the P&C segment.” 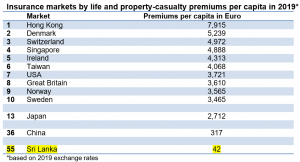 The report added that 2020 will be challenging for Asia as a whole. Premium income is expected to decline by 0.7%, with life insurance shrinking by 1.8% and P&C still slightly growing by 1.9%. Long-term prospects look brighter – the region will return to its “normal” growth and see an average growth rate p.a. of 8.1% until 2030; life and P&C are expected to grow at the same speed. This is almost twice the speed of the global market (4.4%).

“Asia was the region first hit by Covid-19; it will also be the region that recovers first,” said Allianz Group Senior Economist and co-author of the report Michaela Grimm. “Higher risk awareness and pent-up demand for social protection will drive growth in the coming years, with China in the lead: For the next couple of years, we expect double-digit increases in premiums in the Middle Kingdom. By 2030, China’s premium pool will grow by a whopping €777 billion – the market size of the UK, France, Germany, and Italy combined. China and Asia will emerge even stronger than before from today’s crisis.”

Opening up: How does Sri Lanka compare with others?

June 27, 2020 byCharindra No Comments
As Sri Lanka awaits the reopening of its borders on 1st August, here’s a comparison of what’s happening in other countries in the region and beyond which depend on tourism

October 11, 2020 bythemorningeditor1 liberty No Comments
Sri Lanka’s island status has made it a rich hub for seafood of different varieties and an extensive network of seafood exporters. Thus, the seafood product sector has emerged as a quality exporter of