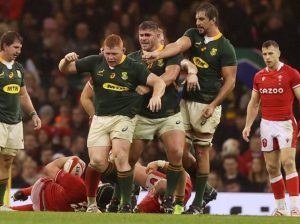 There were star showings all over the field, not least from 100th cap-man Johnny Sexton who picked up a try himself. Andrew Conway ran in for a try three times as he further staked his claim for a starting spot next week against New Zealand.

Japan barely brought the ball into Irish territory but did manage to get a try against the run of play deep into the second half. But a late Cian Healy try further cemented the result and piled on misery to the 2019 World Cup hosts.

It was ugly for long stretches as the All Blacks fumbled their way through probably their worst performance of the season in Rome on Saturday (6). Ian Foster’s touring New Zealanders eventually completed a comfortable-enough victory over Italy, 47-9, seven tries without reply, to extend their perfect record against the Azzurri to 16-0, and make it three wins from three on this northern tour.

They have now clocked up 675 points in 2021, a record for a calendar year, eclipsing the Springboks’ 658 in 2007, and their seven tries took them to 96 – five more than Argentina in 2003. But for vast tracts this was a messy, disjointed All Blacks performance where their vaunted attacking game was mostly blunted by a committed defensive effort from Kieran Crowley’s men.

England responded to the loss of Captain Owen Farrell to a positive Covid-19 test by overwhelming Tonga 69-3 in their Autumn Nations Series opener. The first 82,000 full house at Twickenham for 20 months because of the coronavirus pandemic noisily celebrated an 11-try rout led by Jonny May, Ben Youngs, and Jamie George, who each crossed twice.

Victory was completed despite a disrupted build-up that saw Farrell withdraw as fly-half and Captain after testing positive for Covid-19 with confirmation of his absence delivered only 90 minutes before kick-off. George Furbank was promoted to chief conductor for his fifth cap and a rookie, who is more accustomed to playing full-back, rose to the occasion by showing several attacking flourishes until he was replaced by Marcus Smith.

Springboks scrape through to a tough win over Wales

World champions South Africa ended a run of four successive away defeats against Wales by claiming a dramatic 23-18 victory at the Principality Stadium. It was the Springboks’ first win in Cardiff since 2013, but they did not secure it until substitute hooker Malcolm Marx scored a 73rd-minute try and Elton Jantjies kicked a penalty.

Despite being without injured Captain Alun Wyn Jones and a host of other absent British and Irish Lions, Wales delivered a towering performance, with fly-half Dan Biggar kicking six penalties. Biggar’s sixth successful penalty put Wales back in front at 18-15, although there was drama just a minute earlier when the hosts attacked through Liam Williams just as a spectator ran on to the pitch only a few metres away from him.

South Africa, however, had other ideas, breaking into Wales’ half from 70 metres out, but wing Makazole Mapimpi had a try disallowed, and the home side retained their narrow advantage before Marx struck following a relentlessly-driven line-out, but Jantjies missed the conversion. Jantjies’ final kick penalty, though, meant South Africa sealed the deal and finally broke Welsh’s resistance.

Second-half tries by debutant lock Thibaud Flament and hooker Peato Mauvaka, and superb goal-kicking by Melvyn Jaminet helped France to a 29-20 victory over a battling Argentina. Flament was playing fly-half in the fifth team of England’s Loughborough University five years ago but on Saturday, he was the toast of Paris after his excellent score broke through a determined Puma defence early in the second half.

Argentina were leading 10-9 at the time after a first-half Tomas Cubelli try but Flament’s score was followed by a second try for Mauvaka to put the hosts clear. Argentina showed terrific spirit to launch a series of attacks in the last 10 minutes and closed the gap with a Mateo Carrera’s try but France had the last word with Jaminet’s fifth penalty.

Aluthgamage reports to the ICC (again)

July 7, 2020 byRevatha No Comments
Former Sports Minister Mahindananda Aluthgamage told ‘The Morning Sports’ on Monday (6) that he reported his case, regarding the 2011 World Cup final match-fixing allegation, to the ICC