Into the Past with Thilak: ‘The 3 Ws’ of West Indies cricket

Born: In 1924 in Bridgetown, Barbados 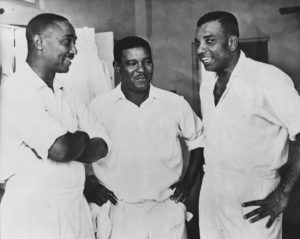 Three of the greatest batsmen that the world has ever known – Sir Everton Weekes, Sir Frank Worrell, and Sir Clyde Walcott – batting at Nos. 3, 4, and 5 were as formidable a cricket trio as you could ever hope to find, with a consistency and a staying-power in the middle that was the worst nightmare of the greatest bowlers of that time.

It has been reported that the debut of the Three Ws – Weekes, Worrell, and Walcott – about 60 years ago, changed the face of cricket in the West Indies and also the world.

Fitting snugly to the Windies’ top-order

These three legends from the tiny island of Barbados in the West Indies made a significant contribution to the legacy of West Indian cricket, with bat, ball, and, above all, their gamesmanship during the years 1948-60.

It has also been reported that the ‘Three Ws’ fitted snugly into their top-order positions, making their debuts in 1947-48 with Worrell on 97 in his first Test against England, and 131 not out in the second.

And Weekes, 141 in the fourth Test, followed by four consecutive centuries against India later that year; 128 in the first Test, 194 in the second, and 162 in the first innings of the third Test and 101 in the second.

Not to be left out, Walcott’s 152 run out against India in the first Test and another century, 108, in the third.

Following that, the historic 1950 Test series versus England was memorable; not only because they beat England for the first time in their backyard, but also for the brilliant partnership between two of the ‘Ws’, Worrell and Weekes, which lit up the third Test at Trent Bridge, Nottingham.

With the series poised at one match all, the West Indies entered the second day of that Test with Worrell taking charge of the proceedings in a manner that was possible to only the great masters.

Wisden, the Bible of Cricket, described the duo’s innings as “batting in scintillating style… the bowlers and fieldsmen were unable to check their wonderful array of fluent strokes”.

September 23, 2020 byRevatha No Comments
It’s paving way for injustice and conflict of interest