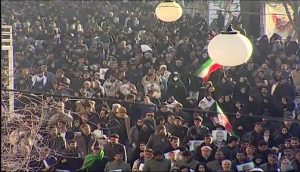 Huge numbers of black-clad mourners have turned out to pay their final respects to Iranian military commander Qasem Soleimani ahead of his burial.

Soleimani was assassinated in a US drone strike in Iraq on Friday, on the orders of President Donald Trump.

His body has now arrived in his hometown of Kerman in south-eastern Iran, where he is being buried on Tuesday morning.

Large crowds already turned out for a funeral procession in Tehran.

Iran has vowed “severe revenge” for the death of Soleimani and on Sunday pulled back from the 2015 nuclear accord.

Soleimani, 62, headed Iran’s elite Quds Force, and was tasked with protecting and boosting Iran’s influence in the Middle East.

In his homeland, Soleimani was hailed as a national hero and widely considered the second most powerful man in the country behind Supreme Leader Khamenei.

But not all Iranians saw him in the same positive light.

He was a hardliner and a dominant force in a regime that shot dead scores of protesters at the end of 2019. He also spent vast sums building up alliances and militias in Lebanon, Yemen, Iraq and Syria at a time when US sanctions are impoverishing many Iranians, BBC Middle East editor Jeremy Bowen says.

The US saw him as a terrorist, and President Trump said Soleimani was plotting “imminent” attacks on US diplomats and military personnel.BBC

September 3, 2018 byMalik No Comments
A huge fire has broken out at the National Museum of Brazil in Rio de Janeiro, the oldest scientific institution in the country.

Kerala floods: A million in camps and thousands stranded

August 22, 2018 byMalik No Comments
Nearly 400 people have died and thousands remained stranded by the worst flooding in the Indian state of Kerala in a century.