IS ICC MAKING HAY WHILE THE SUN SHINES? 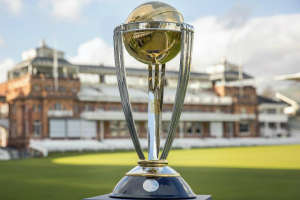 At least one major global cricket competition every year from this year. ICC will be a really busy place from now

*The 2025 Champions Trophy goes to Pakistan

As the host nations for every major men’s limited-overs event between 2024 and 2031 were confirmed and announced by the International Cricket Council (ICC) yesterday (16), Sri Lanka was announced as the co-host of the tenth T20 World Cup, along with India, for the year 2026.

Following the just-finished seventh edition of the World Cup of cricket’s less-than-two-decades-old ‘bang-bang’ format, the T20s, in the United Arab Emirates (UAE), the ICC announced yesterday the hosts of its World Cup, T20 World Cup, as well as the Champions Trophy 50-over global competitions until 2031.

The eighth T20 World Cup is to be staged in Australia next year (see our Page 15 lead story to find out the Australian venues of the tournament) scheduled from 16 October to 13 November 2022.

With the T20 World Cup ended in Dubai last Sunday (14), the global cricket fraternity is entering into a rain of global competitions – at least one of them every year, for 11 years until 2031! Will too much action sour the plot?

The ninth edition of the T20 World Cup in 2024 has been allocated for U.S.A. and West Indies. U.S.A. has joined as a co-host of the event, despite not being a Test-playing country, because the country will hold the 2028 Summer Olympics, which will likely to feature cricket after 128 years; since 1900 Paris Games.

As a result, the ninth T20 World Cup will be the first global tournament not hosted by either India, England, or Australia since the 2014 T20 World Cup was staged in Bangladesh. The ICC has been for a long time looking to give emerging countries the hosting rights for the mega events.

“In June 2024, the ICC Men’s T20 World Cup will go somewhere it has never been before, with U.S.A. hosting the event alongside the West Indies, which staged the tournament in 2010,” ICC announced yesterday.

Eight months later, in February 2025, Pakistan will host the Men’s Champions Trophy, which will return after 2017. It will be the first major global cricket tournament played in Pakistan since 1996 when it hosted the Men’s Cricket World Cup alongside India and Sri Lanka.

In October-November 2027, Namibia will host the Men’s Cricket World Cup for the first time alongside Zimbabwe and South Africa. South Africa and Zimbabwe last staged the event in 2003.

In October 2028 the T20 World Cup will be played in Australia and New Zealand and 12 months later India will host the Champions Trophy.

The final scheduled event, in October/November 2031, will be the Men’s Cricket World Cup (50-over), played in India and Bangladesh. India, interestingly, will stage the next World Cup in 2023 too, meaning there will be two World Cups within eight years.

Will the spectator and fan interest on the game bound to dwindle as there will be a global cricket competition every year from this year onwards – from 2021 to 2031?

That too not including the fourth ICC global event, the World Test Championship, which is held amidst the other three events – the Cricket World Cup, T20 World Cup, and Champions Trophy – in a two-year cycle culminating in the championship final held every two years.

Making hay while the sun shines

The second World Test Championship cycle (2021-23) is now on and there is likely to be five Test Championship finals between now and 2031, that are to be staged amidst the eight limited-over tournaments announced yesterday.

Then comes the women’s versions of World Cup and T20 World Cup too into the scene.

Fundamentally, too much production is bound to affect the demand. ICC should know it better than anyone else. No doubt, this is the peak time, after long, when India in particular is engulfed to the hilt by the cricket fever. Is ICC going to make hay while the sun shines?

January 19, 2021 byRevatha No Comments
May host Sri Lanka this year as compensation

Is ICC making hay while the sun shines?

November 16, 2021 by Ruwani Fonseka No Comments

Bubble life is hard yet boys are mentally strong – Chandimal

Over 200k doses set aside for second jab