January 6, 2022 by Ruwani Fonseka No Comments

Samagi Jana Balawegaya (SJB) MP Harsha De Silva has openly questioned the Central Bank of Sri Lanka via a twitter post if whether the current Gold reserve of USD 382.2 million will be sold in part or full as well.

“Is the CBSL about to sell all or part of the remaining USD 38.2mn Gold reserves of Sri Lanka,” De Silva mentions in his tweet.

He further added in his comments the data of the reserves as at 05th January 2022, in which the Gold reserves was at USD 384.1mn and had dropped down to USD 382.2mn. 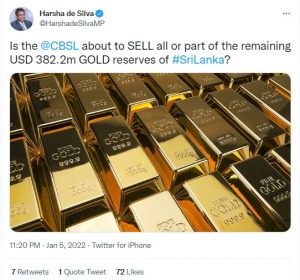 May 9, 2020 byTSM Web Desk No Comments
Former Minister and the Leader of the All Ceylon Muslim Congress (ACMC) Rishad Bathiudeen  has urged President Gotabaya Rajapaksa to permit the burial of Muslim Covid-19  victims.