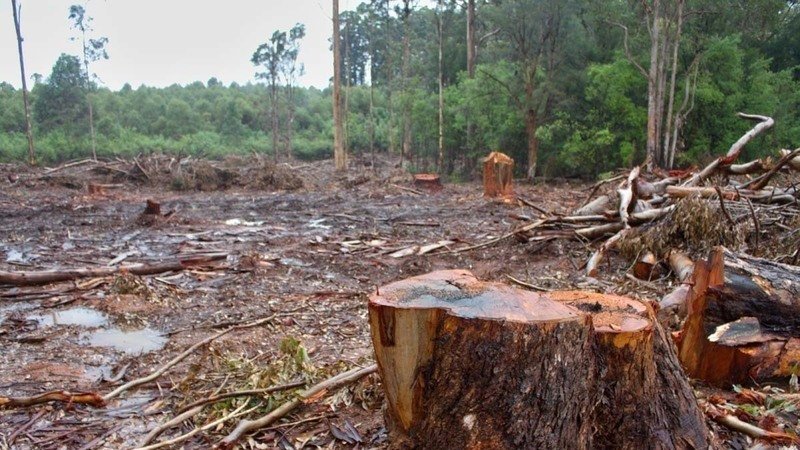 Issue of deforestation: Who is at fault?

As the world seeks to preserve wildlife, protect forest cover, and reduce global warming, forests in many regions in Sri Lanka that have remained largely untouched over the years are now fast disappearing.

As deforestation owing to agriculture, illegal settlements, and various infrastructure development projects over the past few decades has posed an imminent threat to the forest cover, reports of more deforestation and illegal commercial projects have been reported from many parts of the country.

In the most recent edition of “Gama Samaga Pilisandarak” (Discussion with the Village) held in Galle, President Gotabaya Rajapaksa, addressing the people, stated that he received many requests to look into the issue of lands that are a part of the forest cover being used for agricultural purposes.

Whilst these lands have been cultivated for generations, President Rajapaksa noted that finding a practical solution for this issue is the need of the hour, given that people have been settled in these areas for a considerable period of time. He went on to clarify that finding a practical solution didn’t necessarily mean the further clearing of forest cover for agrarian purposes.

As the President addressed several other issues of the people of the surrounding areas, he went on to note that it was the duty of officials to take action against any acts of deforestation taking place within the country. Questioning why the officials had turned a blind eye on the situation while so much damage has been done, he expressed that he expected the officials to take necessary measures to stop the environmental damage that is being done, and highlighted the need to provide a tangible solution to the people and the issue at hand.

Speaking to The Sunday Morning, Department of Forest Conservation Spokesperson Nishantha Edirisinghe stated: “Most of the lands that had been used for cultivation and agrarian purposes seem to have a valid permit, but some of them don’t. While we can only take legal action against those who do not possess a valid permit, we would have to thoroughly investigate the process of handing out permits.”

Edirisinghe further noted that some of the lands that have been cleared indeed fall within the range of the forest cover.

“If they have a valid permit in hand, however, we would not be able to take any legal action against them, even if that meant they are clearing forest cover,” stated Edirisinghe, adding that this is especially prevalent in relatively smaller plots of land used for cultivation.

While many land allocation decisions have been made without considering the ecological status of the forests and the land that supports them, it is unfortunate how this has led to irreversible erosion of the ecosystems, as well as the fragmentation of forest resources.

Present-day elephant habitats extend into and overlap with these agricultural lands, resulting in an inevitable conflict between man and elephant. Yet, it is only the tip of the iceberg. The sheer ecological impact it has on the environment is alarming.

Serving as carbon sinks, forests are important in mitigating climate change because they absorb carbon dioxide that would otherwise escape into the atmosphere and contribute to global warming. Whilst it is estimated that 15% of total global greenhouse gas emissions come from deforestation, at the current rate of destruction, reducing it will be crucial to avoid further damage to the environment.

Deforestation is one of the most serious environmental issues in Sri Lanka, if not the most. Albeit being one of the geographically smaller countries in Asia, Sri Lanka is known to support the largest biodiversity per unit area in its natural forests. While the Fauna and Flora Protection Ordinance, with subsequent amendments, addresses the protection of wildlife and flora in the national reserves of Sri Lanka, along with many other laws and regulations that have been put in place to protect forests and biodiversity, it is evident that the capacity to enforce such laws seems to be declining with time.

CMTA warns buyers of frauds in the Used vehicle market

February 14, 2021 byNews Admin No Comments
Used vehicle purchasers have been issued a warning by the Ceylon Motor Traders’ Association (CMTA) to exercise caution, raising concerns over incidents of fraud that are persistent in the used vehicle

Back to the future

September 6, 2020 bySarah Hannan No Comments
It is said that the more things change, the more they remain the same. What better way to describe the 20th Amendment to the Constitution of the Democratic Socialist Republic of Sri Lanka