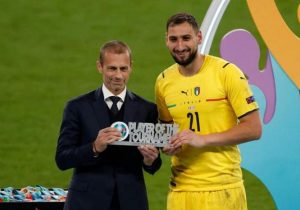 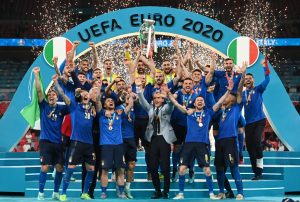 It was heartbreak yet again for England, in their first-ever final in the European Championship as Italy tipped over the line in the shootout on Sunday (11). Gareth Southgate made a tactical switch in the starting line-up which had Kieran Trippier replace the young Bukayo Saka. It allowed Luke Shaw and Trippier to play as advanced wing-backs and the plan paid dividends right away.

Luke Shaw started the move in his own half by passing to Harry Kane before sprinting towards the Italy goal. Kane, moved the ball cross field to Trippier who had acres of space as he delayed his cross long enough for Shaw to time his run at the far post and score with a controlled volley past goalkeeper Gianluigi Donnarumma. It was also the fastest goal conceded in a European Championship final at one minute and 57 seconds and Shaw’s first in national colours.

During most parts of the first half, England dominated with Declan Rice and Kalvin Philips winning the mid-field battles with Marco Verrati and Jorginho. Although chances were limited, Italy came back strong in the second half with Federico Chiesa finding the target with a low right-foot shot from the edge of the box which called for a diving save from Jordan Pickford.

The Azzuri was allowed to roam free as England held back to try and hold on to their slender lead. It proved costly when veteran centre-back Bonucci levelled the scores halfway through the second-half. He shot in after England had failed to clear a corner when Verrati’s header was pushed onto the post by Pickford only for it to rebound back into Bonucci’s foot.

Southgate brought in fresh legs replacing Trippier and Rice with Saka and Jordan Henderson, but they had little effect as Roberto Mancini’s substitutes continued to dictate the play and remained the team in control for the remainder of the 90 minutes. The chances were slim to none during the extra 30 minutes and the game went into the dreaded penalties.

Italy had the upper hand with Donnarumma’s longer reach compared to Pickford, but it was Pickford who got the first save during the shootout. Following Dominico Berradi’s and Harry Kane’s successful penalties, Andrea Beletti stepped in and his shot was saved by Pickford. The second shot for England was thumped home by Harry Maguire which gave England the lead.

Southgate brought in Rashford and Sancho in the 119th minute, for the shootout. It proved to be the demise of England as both players missed their shots; Rashford hit the post while Sancho’s was saved by Donnarumma.

Bonucci and Federico Bernardeschi converted for Italy, which meant Jorginho’s fifth shot had to be saved by Pickford to keep England in the hunt. Jorginho, the highest goal scorer for Chelsea last season with all of them coming in penalties, made a name for himself as a shootout specialist but he was denied by Pickford to keep the game alive.

Unfortunately, the weight of a whole nation was put on the shoulders of the 19-year old Bukayo Saka, who stepped up for the fifth penalty. His shot was easily saved by Donnarumma to seal the win for Italy.

May 24, 2022 byNews Admin No Comments
Kylian Mbappé has committed his future to the Ligue 1 champions Paris Saint-Germain Football Club (PSG), turning down a move to the Spanish giants, it was reported on Sunday (22).

On This Day – 4 and 5 March: Happy birthday Ishara Amerasinghe!

March 4, 2022 byRevatha No Comments
The events that shaped the history of sports