November 14, 2021 by Dimithri Wijesinghe No Comments

It’s that time of the year once again, where hundreds of Sri Lankans are being displaced, injured, and in extreme cases, seeing the loss of life due to natural disasters, particularly floods and landslides.

Every year, just before Christmas, we hear morbid tales of homes getting buried and people devastated due to what would appear to be manageable situations.

University of Peradeniya PhD Professor of Geology Atula Senaratne stated that while natural disasters are a part of life, management of said disasters is very much doable, and is being done all over the world. He shared that Sri Lanka does in fact have the data, but that we simply have to stop waiting for the disasters to happen in order to take action.

Is it a hazard or a disaster?

Despite all the advances in science and technology, man is helpless in the face of natural calamities that are termed as disasters, because of the trail of destruction in terms of loss of lives and property caused by them.

A hazard is a situation where there is a threat to life, health, environment, or property, and natural hazards are naturally-occurring physical phenomena caused either by rapid or slow onset events which can be geophysical, hydrological, meteorological, or biological.

When any of these hazards take place in an area that is desolate, it causes no harm to human lives or property, and it is not called a disaster although technically it is the same phenomenon.

Natural hazards are not preventable, however, and Prof. Senaratne provided that we can certainly learn to live in harmony with nature by not taking steps that can turn hazards into major disasters. If one takes into account the cost that we finally pay when a disaster strikes and the cost of averting it, we come to a conclusion that it is prudent to be prepared rather than inviting the wrath of nature on a very large scale. 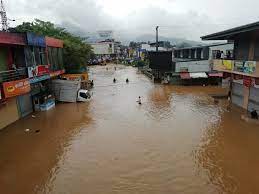 According to Prof. Senaratne, the reason why it seems to be “floods again” is because despite measures being introduced and mandated, there is no practical application of it at a grassroots level.

He shared that when it comes to landslides, there are three elements to be fulfilled: there must be a slope, a saturation of the soil covering the floor, and finally a sufficient quantity of water to effectuate this saturation. He provided that you need an excess of 100 mm of continuous rainfall on these vulnerable slopes to cause a landslide.

One might assume that surely science today allows us to identify these vulnerable spots and mark them as such – and you would be right to assume so, because there is in fact a map where eight districts have been identified and the most vulnerable landslide prone areas have been mapped clearly with coding indicating most to least vulnerable. This “hazard mapping” has been issued to all necessary authorities from the Disaster Management Centre (DMC) to each individual grama niladhari wasama.

Disaster profiles have been prepared for all kinds of disasters, he said, noting that there are disaster management centres in every district, manned by trained personnel. Sri Lanka has the best “information” prepared, but every year floods devastate an increasing number of lives. He said that this demonstrated that we are not sufficiently prepared, and that we must take steps to evacuate and share every minute detail of things people should know, including steps like elevation, waterproofing, clearing debris, getting flood insurance, emergency notifications, flood watch, and most importantly, teaching people to avoid ignorance.

Prof. Senaratne shared that while there are instances where authorities attempt to take the necessary steps which include early evacuation so as to avoid serious injury, they face complications when attempting to evacuate people who are not in the midst of danger. “There are issues with communication, mostly because estate workers have no interest in listening to the news, and so they require personal announcements to inform them that their lives are in danger. However, even then with announcements made in this way, there are challenges in removing people from the properties in time,” he said.

He added that in order to mitigate this, there is talk of a circular to be issued which empowers DMC officials to forcefully remove these persons from their homes if they refuse to evacuate when the warning is issued. 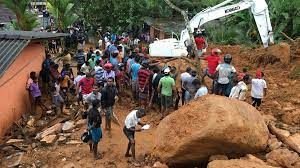 Prof. Senaratne shared that some of the more fundamental issues lie in the fact of disjointed management. There are numerous authorities, but it would appear that nobody talks to each other or they don’t care to know or share information.

Environmentalist Jayantha Wijesinghe shared his thoughts on this matter, providing that the lack of a systematic strategy is the cause for a lot of this suffering.

He stated that despite having the data that allows us to mitigate these natural hazards and to prevent them from becoming disasters, Sri Lanka continues to put the public in danger. He said that the National Building Research Organisation (NBRO) continues to approve building permits in locations that are demarcated as hazardous locations prone to landslides, adding that you only need to look at the constructions on the Hantana slopes for evidence. Furthermore, there are mining permits issued by the Geological Survey and Mines Bureau, and numerous other authorities like the Irrigation Department, Department of Agrarian Development (which is tasked with ensuring protection of low lands), who have continued to cut corners, thus paving the way for the out-of-control situation that we are in right now.

Another example Wijesinghe discussed was the destruction of river beds and river basins which would otherwise have functioned as buffers, protecting people from floods and overflows. He said that we have also cleared up catchment zones like the wetlands, the mountains, and the hills, which previously prevented the water from hitting the soil directly, and now with those areas cleared out we are experiencing soil saturation which then gives way to erosion and landslides. 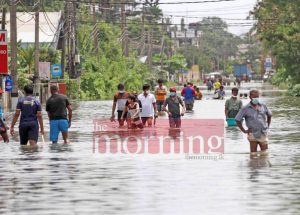 Wijesinghe referred to the most recent incidents; the deaths in the Alawwa and Rambukkana-Dombemada areas due to landslides. The DMC announced that heavy rains, floods, and landslides have affected over 7,000 persons from 1,836 families. A majority of the affected are from the Galle, Jaffna, and Mannar Districts. Close to a 100 houses have been damaged, and over 200 persons have been moved to safe locations. He shared that all this news could have been avoided – especially in the case of Alawwa, where he noted that the homes were built on a nearly 60 degree slope. He said that if you had even the slightest sense, you would question how these housing structures were legally permitted in these areas.

He did however share that it should be a collective effort, while the authorities are responsible for enforcing rules and regulations and sticking to the recommendations made by geologists and other experts, it is also the responsibility of the public to follow these rules, and not attempt to weasel their way into a grey area where they can carry on with their unsafe constructions, since there’s a reason for the limitations imposed upon us.

February 19, 2021 byNews Admin No Comments
On 21 September 2020, the National Police Commission (NPC) granted approval to promote a female police officer to the rank of Deputy Inspector General of Police (DIG), which should have, in an ideal w

LGBT discrimination by Sri Lanka Police: Violation of their own laws in training?

August 6, 2021 byNews Admin No Comments
This past week, a video clip was shared widely on social media of a counsellor being discriminatory against the LGBT community at a training session with the Sri Lanka Police in Kandy.