December 5, 2021 by Dimithri Wijesinghe No Comments

The first annual Jaffna Queer Fest concluded its successful 10-day experience from 21-30 November at Kalam, Jaffna. The Jaffna-based festival was the first of its kind, featuring queer excellence in creative and cultural sectors, with an emphasis on supporting local, national, and international exchanges in queer cultural production and circulation. 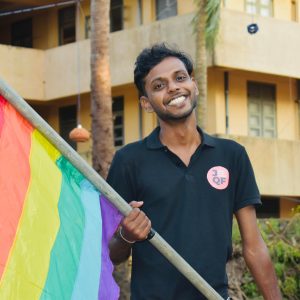 The collaborative efforts of an incredibly ardent community were brought to fruition courtesy of festival Founder and Director Kasro Ponnuthurai and festival Curator Hari Rajaledchumy.

The event, which was originally intended to be an entirely virtual affair, was readjusted to be a hybrid festival as soon as the lockdown across the island was lifted. According to festival Curator Hari Rajaledchumy, while there was some initial trepidation, considering that it is their very first effort, things went incredibly smoothly and far better than they could’ve ever hoped for.

With the festivities coming to a close – we found that everything went out with a bang, with the scheduled celebratory dinner for the closing event turning into an impromptu afterparty with an unexpected attendance – Hari generously gave us a recap of the events that took place at the festival.

Before we get into the events however, Hari shared her and festival Founder Kasro’s journey leading up to the eventual launch of the festival, how they worked tirelessly in putting together something never done before in Jaffna. She said: “Kasro and I would have endless discussions over the phone, I was in Sri Lanka at the time but because of the pandemic and also with Kasro being a veterinarian, there was limited time between us.” She shared that they went back and forth on whether this was in fact the time to put this into action: “Is this the moment, are we ready?” She said that thankfully, because they had originally hoped to do it entirely online, they felt a slight bit of relief, deciding that next year they would arrange a physical event. 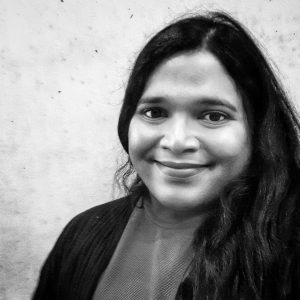 “We had our anxieties. I am not going to lie, but we also knew that in the past 10 years things have been shifting. We have friends in the community, non-queer allies in the arts and literary fields,” she said, and so they felt they had the strength to move forward.

Hari also noted that a key point in this festival is that it was not meant to be a purely human rights focused approach; rather, it is borne out of literature and the arts. These fields have long embraced, for lack of a better word, queer avenues.

“So we knew that would give us some foundation in the community. We therefore steered it through those avenues, and I think these decisions paid off,” she said.

She also noted that to their great surprise, the absolute success was in how far and wide the event had reached, as they saw the attendance of a variety of community members who would not have otherwise taken part in frontline events of the community. She shared that even Kasro himself, who has had years of working on the frontlines as an activist, was surprised by the sheer number of community members who chose to take part. “It was a moment of great pride for us,” she said.

Regarding the ultimate goal in putting together the festival, Hari shared that what they were thinking of was the lack of spaces to engage and create queer cultural content, especially in the Tamil language. “There are many Sri Lankan Tamil people producing queer content, but it wasn’t getting the reach it deserved; it wasn’t circulating as is ideal,” she said, and so they hoped to create a space for these discussions and works. 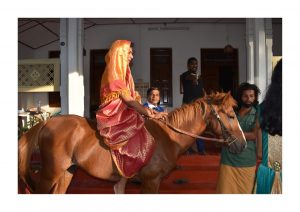 Dance performance by Sathurshan at the opening event

She also added that the frontline initiatives like the Jaffna Transgender Network, Jaffna Sangam, and others were inundated with the very pressing issues of rights-based queries and numerous other areas of concern, and they felt that there was a lack of a space where the queer arts were celebrated, for joy and cultural exploration.

Getting back to our event recap, Hari shared that the opening event itself was a rather attractive affair, with an artist performance taking centre stage – a dance performance by Sathurshan. The performance and the accompanying exhibition was devised by artist Kajendran Sivasubramaniam with Angel Queentus, Madhubala M, and Anton Uthayakumaran.

She said that day one consisted primarily of movie screenings, and a notable feature was the movie screening of Roobha (2018) which was directed by Lenin M. Sivam who was born and brought up in Jaffna. The film features a trans woman in a leading role. Written and acted by another Jaffna-born talent; writer and actor Anthonythasan Jesuthasan.

Hari provided that it was important for them to bring this film home to Jaffna, and similarly, the other screenings on the first day were focused on bringing queer content rooted in the vernacular and the regional. She extended her gratitude to Swarnavel Eswaran, Leena Manimekalai, and the Panmai Theatre Group, who were tasked with putting together the screenings, which were all well received by the festival audience. 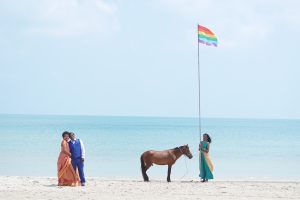 Scenes from the Jaffna Queer Fest

Day three saw the workshop conducted by artist Yalini Dream, well-known and incredibly visible in in the public for over two decades now, especially online as an iconic Sri Lankan Tamil lesbian presence. Hari shared that Yalini is also deeply committed to transformative, ethical potentials afforded by creativity and the arts, so she was quite a perfect addition to the festival and presented the ideal opportunity for attendees to learn from her.

Hari also noted that through their online screenings the festival was able to introduce their audience to the life and works of D’lo, another long-established queer and trans icon with Sri Lankan Tamil roots. Queer Fest screened the Crescent Diamond’s short documentary “Performing Girl”, based on the story of D’lo, which has played an important role in kick-starting difficult conversations around trans-masculine identities and negotiations of the past.

We would be remiss not to mention the online poetry open mic, which according to Hari was a huge success, an outcome which was a pleasant surprise to them all. She shared that originally they wondered if they would be able to encourage queer artists to share their works, particularly amateur artists to share a piece of their experience in this way, in a public setting. However, she said that their concerns were all for naught because there was an incredibly enthusiastic response to this particular event. 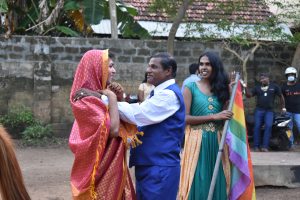 Scenes from the Jaffna Queer Fest

She shared that they had participants from diverse locations (Kalmunai, Badulla, Point Pedro, and Vavuniya), adding that as a festival, it made them realise that there is a need for ongoing events/spaces for creative expression that go beyond meeting survival needs in the community. “We need spaces that nurture and develop talent and steer towards committed cultural production and engagement,” she said, stating that this would certainly be one of the major takeaways from their event. She said that as the festival has drawn to a close, they will now be thinking about aligning these community talents and resources towards their next iteration in 2022.

Some other notable highlights throughout were the Queerness and Writing Workshop with Nadika and the spiritual predecessor to the poetry event – the open mic readings for prose which took place on day five. Hari noted that writer Gireesh read from his forthcoming novel “Swyambhulingam”, and writer and activist Eelanila read from her recently published autobiography “Arikkan Lamp” (Hurricane Lamp).

They also featured a discussion with Wara Thiagarajah on the topic of “Decentralisation of Queerness within Sri Lanka”, which proved to be insightful, echoing a lot of truth amongst the community. There was also a discussion with Moulee on “Developing and Sustaining Queer Cultural Spaces”.

Finally came day 10, which featured a party with music curated by Imaad Majeed, who was one of the many who travelled from Colombo to attend the festival. Then came the incredible turnout at the afterparty and dinner, which Hari said was simply the perfect metric to gather how well the event was received, and they were all able to rest their fears knowing that all was so very well received.

Considering that the Jaffna Queer Fest has since come to an end, Hari shared that they do have some work they wish to do moving forward. She noted that community involvement and engaging local resources on a more extensive level was something they hoped to look into, while also building commercial partnerships in the region and creating talent development opportunities. She also said that they will be looking at Queer Fest 2022, and programmes to gather resources for and produce work exclusively for the festival.

In these changing times : Doner & Durum’s Seyed Waqar Moulana on how they adapted to new normal