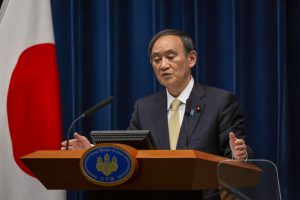 Japanese Prime Minister Yoshihide Suga is unlikely to call a general election until late September, after the Olympics and Paralympics

Japanese Prime Minister Yoshihide Suga is poised to hold off from calling a general election until after the Tokyo 2020 Olympic and Paralympic Games.

According to the Japan Times, Suga insisted “our priority is the fight against coronavirus” in response to a question about when he planned to dissolve Parliament.

Suga’s ruling Liberal Democratic Party (LDP) has faced criticism over the speed of the country’s vaccination rollout, with just one per cent of the Japanese population inoculated against Covid-19.

A general election must take place before October 21 when terms of members of Japan’s Lower House are due to expire.

Suga is reportedly considering dissolving Parliament following the conclusion of the Paralympics on September 5.

An LDP leadership election is due to be held the same month, with Suga’s term as President of the party – and therefore Japan’s Prime Minister – due to expire.

A senior Government official told the Japan Times that it was “utterly impossible” to stage a general election prior to the Games.

“Breaking up the Lower House is not possible at all at a time when we have still been unable to bring the coronavirus under control,” a senior LDP member added.

“We’ll face a fierce backlash if the chamber is dissolved under the current circumstances.”

It would mean Suga would be Prime Minister during the Games, and the Olympics could turn into a political football ahead of the vote.

The 72-year-old replaced Shinzō Abe who stepped down due to health reasons.

The Tokyo 2020 Olympics and Paralympics were scheduled to be held last year only to be postponed to 2021 due to the global health crisis.

Since succeeding Abe, Suga has continually stressed the Games will be held this year despite public opposition amid concerns over the spread of coronavirus.

A state of emergency was declared in Tokyo on April 24 – less than three months before the scheduled opening of the Olympics.

Tougher restrictions are due to remain in place until at least May 11, with the Golden Week running from April 29 to May 5 but festivities curtailed.

Tokyo reported 1,050 new Covid-19 infections yesterday – the most since January – but the figure fell to 879 today.

Suga is reportedly planning to set up large-scale vaccination centres in a bid to increase the pace of the rollout.

“My Government will make all-out efforts so that the second round of coronavirus vaccinations for elderly citizens who want to get inoculations will be completed hopefully by the end of July,” said Suga, per the Japan Times.

More than 10,000 Japanese citizens have died from coronavirus since the start of the pandemic.

The number of patients with severe Covid-19 symptoms increased by 1,050 yesterday, beating the previous daily record of 1,043 set in January.

Japan also confirmed a further 5,983 infections and 83 deaths from coronavirus.

March 2, 2021 byRevatha No Comments
SLBC's Palitha Perera began it on 2 March 1963 in an inter-school cricket Big Match in Colombo

September 10, 2019 byRevatha No Comments
Ten SL seniors pull out of the limited-over segment of the Pakistan tour denting Pakistan's hopes to have a home Test soon