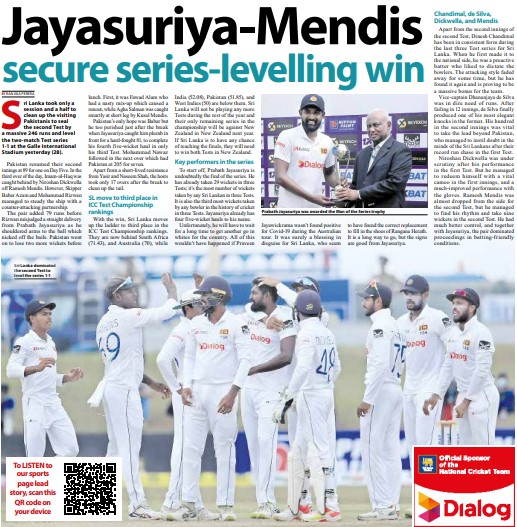 Sri Lanka took only a session and a half to clean up the visiting Pakistanis to seal the second Test by a massive 246 runs and level the two-match Test series 1-1 at the Galle International Stadium yesterday (28).

Pakistan resumed their second innings at 89 for one on Day Five. In the third over of the day, Imam-ul-Haq was caught behind by Niroshan Dickwella off Ramesh Mendis. However, Skipper Babar Azam and Mohammad Rizwan managed to steady the ship with a counter-attacking partnership.

The pair added 79 runs before Rizwan misjudged a straight delivery from Prabath Jayasuriya as he shouldered arms to the ball which nicked off the bails. Pakistan went on to lose two more wickets before lunch. First, it was Fawad Alam who had a nasty mix-up which caused a runout, while Agha Salman was caught smartly at short leg by Kusal Mendis.

Pakistan’s only hope was Babar but he too perished just after the break when Jayasuriya caught him plumb in front for a hard-fought 81, to complete his fourth five-wicket haul in only his third Test. Mohammad Nawaz followed in the next over which had Pakistan at 205 for seven.

Apart from a short-lived resistance from Yasir and Naseem Shah, the hosts took only 17 overs after the break to clean up the tail.

With the win, Sri Lanka moves up the ladder to third place in the ICC Test Championship rankings. They are now behind South Africa (71.43), and Australia (70), while India (52.08), Pakistan (51.85), and West Indies (50) are below them. Sri Lanka will not be playing any more Tests during the rest of the year and their only remaining series in the championship will be against New Zealand in New Zealand next year. If Sri Lanka is to have any chance of reaching the finals, they will need to win both Tests in New Zealand.

Key performers in the series

Unfortunately, he will have to wait for a long time to get another go in whites for the country. All of this wouldn’t have happened if Praveen Jayawickrama wasn’t found positive for Covid-19 during the Australian tour. It was surely a blessing in disguise for Sri Lanka, who seem to have found the correct replacement to fill in the shoes of Rangana Herath. It is a long way to go, but the signs are good from Jayasuriya.

Apart from the second innings of the second Test, Dinesh Chandimal has been in consistent form during the last three Test series for Sri Lanka. When he first made it to the national side, he was a proactive batter who liked to dictate the bowlers. The attacking style faded away for some time, but he has found it again and is proving to be a massive bonus for the team.

Vice-captain Dhananjaya de Silva was in dire need of runs. After failing in 12 innings, de Silva finally produced one of his most elegant knocks in the format. His hundred in the second innings was vital to take the lead beyond Pakistan, who managed to instil doubt in the minds of the Sri Lankans after their record run chase in the first Test.

Niroshan Dickwella was under scrutiny after his performance in the first Test. But he managed to redeem himself with a vital cameo in the first innings, and a much-improved performance with the gloves. Ramesh Mendis was almost dropped from the side for the second Test, but he managed to find his rhythm and take nine wickets in the second Test. He had much better control, and together with Jayasuriya, the pair dominated proceedings in batting-friendly conditions.

February 26, 2021 byRevatha No Comments
Dimuth Karunaratne to lead SL in his absence!