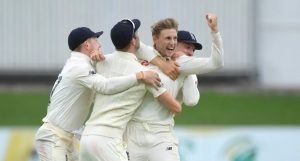 England Captain Joe Root has humiliated rival skipper Dinesh Chandimal with a perfectly-timed sledge during the second Test in Galle, reported the Daily Telegraph in England this week.

Sri Lanka were 4/47 in the second innings with English spinner Jack Leach bowling to Chandimal in the 16th over. Standing at first slip, Root attempted to distract the batsman with a harmless sledge: “Come on Chandi, throw your wicket away.”

And right on cue, Chandimal promptly looked to slog the next delivery, only for the top edge to fly towards James Anderson, who claimed a smart catch at mid-on. Root celebrated the dismissal with wicketkeeper Jos Buttler, laughing ecstatically as Chandimal made his way back to the sheds.

The 30-year-old then cleaned up the Sri Lankan tail by snaring two wickets in consecutive deliveries, with the hosts all out for 126 on day four.

“Quite an amazing innings,” Buttler said of his skipper.

“To back up his double hundred in the first Test … both physically and mentally to show the application to go and do it again to their spinners. A master-class really.

“It has been a great education for all of us really watching it from the sidelines.

“I think we just have to praise not just the technical and tactical aspects of his game, but the physicality and concentration to apply himself for so long is quite amazing.”

Sri Lanka lost the series 2-0, their sixth consecutive Test defeat against England at home, the fourth Test loss in a row, and the third consecutive defeat against the same opposition at Galle, considered Sri Lanka’s most successful Test venue.

August 14, 2018 byMalik No Comments
Australian batsman Steve Smith has returned to the top of the Test batting rankings, despite being banned from playing in the format since March.