Justice Minister refuses to give special treatment to protesting inmates

Govt. tells prisoners to abandon the protest and participate in discussions

In response to the demands made by a group of female inmates at the Welikada Remand Prison, Justice and Prison Reforms Minister Thalatha Athukorala said the legal process will take place at its own pace.

The protest which was launched last morning (13) by around 25 female inmates at the Welikada Prison who climbed on top of the prison roof, demanding to expedite their court cases and to restore the facilities they have lost due to the recent measures imposed by the authorities, continued today (14). 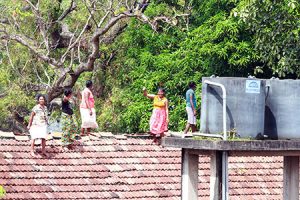 Minister Athukorala told The Morning that anybody had the right to protest, even the prisoners, but the normal process would take its course to provide a solution to their demands.

She also said that she had advised the Welikada Prison Superintendent on this.

“They can climb on the roof or anywhere, but we can’t make any changes. The process will take place at its own pace,” she said.

Claiming that illegal dealings are taking place in the prisons, the Minister assured that she would take every possible step to control the situation.

According to sources, the protest had been launched by the female inmates who have been accused of drug-related crimes, against the limiting of the number of meals that could be brought into the prison from the outside and to accelerate the court proceedings of their cases.

It is reported that the authorities haven’t been able to get the female prisoners down from the roof. The police have deployed a special team to keep the situation under control.

Justice and Prisons Reforms Ministry Secretary Mangalika Adhikari stated that the ministry was ready to discuss matters with the protesters if they would give up their protest and come down. She said that a ministry official had already been sent to the Welikada Prison premises to look into the matter.

Four detainees were injured and hospitalised following a clash which occurred last night between two groups of protesters. However, they are not in critical condition and they are receiving treatment at the hospital for minor injuries.

District-wise industrial parks in the offing

January 27, 2021 byNews Admin No Comments
The Government is seeking to reduce the number of youths lacking any vocational training or skill, a figure which is in the range of 60% at present, by 20% within the course of two years..