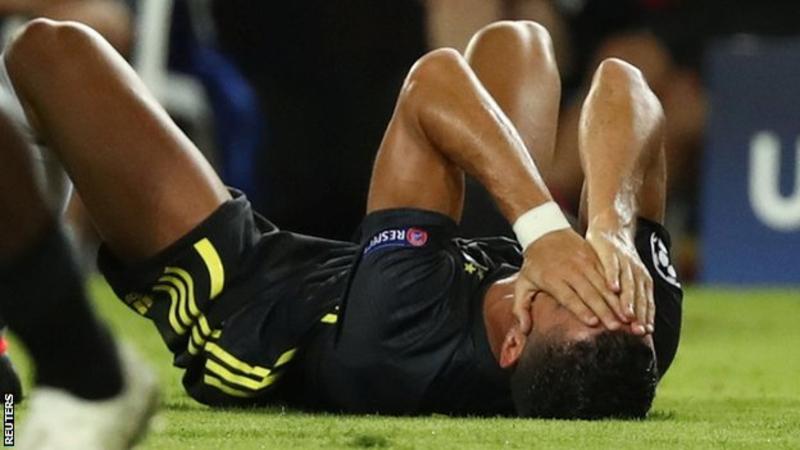 A tearful Cristiano Ronaldo was controversially sent off as Juventus claimed a hard-fought win at Valencia.

The Portuguese forward, making his Champions League debut for Juve, appeared to grab Valencia defender Jeison Murillo’s hair as they tangled off the ball midway through the first half and referee Felix Brych consulted his assistant behind the goal before showing the five-time Champions League winner a straight red card.

Ten-man Juve rallied and took the lead on the stroke of half-time when Miralem Pjanic scored from the penalty spot, and shortly after the break, the Bosnian midfielder stroked home another spot-kick.

Valencia were then awarded a penalty in stoppage time but Juve goalkeeper Wojciech Szczesny denied Daniel Parejo to preserve the Italians’ clean sheet.

It was an unhappy return to Spain for Ronaldo, who moved to Juve from Real Madrid for £99.2m in the summer.

His influence on the game was growing when he tried to latch onto a cross and was blocked off by a tumbling Murillo. He gesticulated to Murillo to get up and appeared to pull the defender’s hair before turning away in frustration.

Amid a hostile atmosphere, opposing players clashed in the box and the referee spoke with his assistant at length before producing a red card.

The Champions League’s record goalscorer was visibly furious, protesting his innocence but finally leaving the pitch in tears.

It was his first sending off in 154 Champions League appearances and he now faces at least a one-game ban.

Juventus have won Serie A seven years in a row and they used all their experience to silence the raucous Valencia fans and close out the win.

Manager Massimo Allegri signed Ronaldo to help make the difference in this competition but they were comfortable even without their big summer signing.

They should have been ahead before Ronaldo’s sending off and finally pulled in front with Pjanic’s first penalty shortly before half-time after Parejo fouled Joao Cancelo in the box.

In the second half, Murillo wrestled Leonardo Bonucci to the ground from a corner and Pjanic stepped up to beat goalkeeper Neto once more.

Although Valencia were handed a penalty in injury time after late substitute Daniele Rugani fouled Gabriel, Parejo’s weak effort was saved by Szczesny.

On this evidence, the Italian champions look a good bet for another strong campaign after reaching the 2016-17 final.

Their defensive resilience is unparalleled and they once again demonstrated their uncanny ability to grind out a result.

Once Ronaldo is up and running, they will be well placed to chase a first Champions League title since 1996. (BBC Sport)

May 5, 2022 byNews Admin No Comments
Manchester City suffered one of the most remarkable Champions League collapses as Real Madrid came back from an abyss to set up a final showdown with Liverpool on Wednesday (4). City were two goals ah