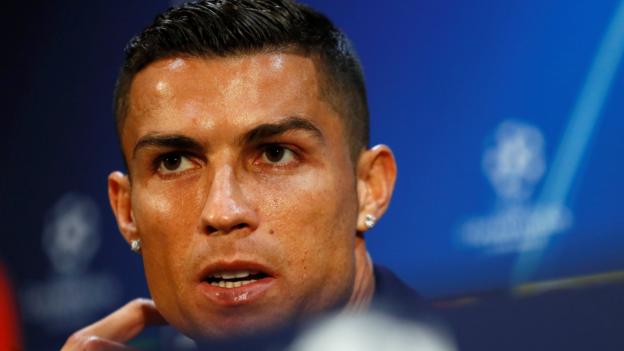 Cristiano Ronaldo says his “lawyers are confident” and “the truth is always coming” as he answered questions at a Juventus news conference about a woman who has accused him of rape.

Kathryn Mayorga, 34, has alleged that the former Real Madrid player raped her at a Las Vegas hotel in 2009.

Speaking 24 hours before facing former club Manchester United, Ronaldo said: “I know I am an example, I know 100%, in the pitch and outside the pitch”.

“I am always smiling, a happy man,” said Ronaldo in a surprise appearance at an Old Trafford news conference before Tuesday’s Champions League fixture.

“I play in a fantastic club, have a fantastic family. I have four kids, I am healthy – I have everything, so the rest doesn’t interfere on me.

“I am not going to lie on the situation. I am very happy. My lawyers are confident and of course I am too.

“I enjoy football, my life. The rest, I have people who take care of my life and, of course, the truth is always coming in a first position, so I’m good.”

Der Spiegel said that in 2010, she reportedly reached an out-of-court settlement with Ronaldo involving a $ 375,000 (£ 288,000) payment for agreeing never to go public with the allegations.

Ronaldo’s lawyer has previously said his client does not deny entering an agreement but that “the reasons that led him to do so are at least to be distorted”.

He added: “This agreement is by no means a confession of guilt.”

Las Vegas police have confirmed they investigated a complaint in June 2009, but added they had no suspect in the case. This month they said they had reopened the case.

Mayorga was inspired to speak out by the #MeToo movement, her lawyer has said, and is suing Ronaldo in a lawsuit in the United States.

The Portuguese international has previously dismissed the allegation as “fake news” and earlier in October issued a statement through his Twitter account in which he “firmly” denied the accusation.

His lawyers claim documents used in Der Spiegel’s investigation have been “completely fabricated” but the publication says it has “no reason” to doubt the authenticity of key documents used in its story. (BBC Sport)

July 8, 2021 byRevatha No Comments
Some major sports happenings of the day

Negombo Youth beat New Star SC by two goals to nil at Sugathadasa Stadium yesterday (20). The first half ended goalless for both sides. The second half started off w