Juventus slip to fifth: Inter Milan edge closer to the Serie A title 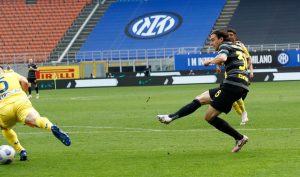 The 2021 Serie A title is almost in the hands of Antonio Conte’s Inter Milan after they registered their 24th league win this season. Napoli climbed up to third spot after Juventus and AC Milan suffered their second straight defeat.

Inter Milan are cruising their way to the title at the moment with an 11 point lead over second placed Atlanta. They registered their 24th league win last weekend which came against Verona. Matteo Darmian scored the decisive goal in the 76th minute. Inter Milan is only two wins away from taking an unassailable lead over the rest which would secure their 19th Serie A title. Last they won it in 2009/10 season.

Juventus had to settle for a 1-1 draw against Fiorentina on Sunday (25). Fiorentina took the early lead with a successful penalty from Dusan Vlahovic in the 29th minute. Juve managed to equalise before the half-time through Alvaro Morata. A strong defensive effort from Fiorentina kept Juve at bay and secured a valuable point as they try to stay away from the relegation zone.

AC Milan suffered their second straight defeat as Lazio gave them a 3-0 thrashing on Monday (26). Milan conceded in the second minute when Joaquin Correa found the back of the net for Lazio. He scored his second goal at the start of the second half, which gave AC Milan a mountain to climb. AC Milan never found a way to come back into the game and the Ciro Immobile put the icing on the cake with the third goal to secure three big points for Lazio. AC Milan would be disappointed with their performances in the second half of the league. They were leading the points table for 17 weeks but now they are struggling to secure a spot in the top four.

Napoli’s 2-0 win over Torino put them ahead of Juventus at third spot on Sunday. Two early goals from Tiemoue Bakayoko and Victor Osimhen proved enough for them to secure three points. Napoli is level on points with both Juventus and AC Milan but their GD keeps them above the rest.

Apart from the League leaders Inter Milan, Atlanta, Napoli, Juventus and AC Milan are in a tight race for the remaining three spots in the top four. Here’s how the table stand after the Match-day 33.

March 12, 2020 byRevatha No Comments
A fan who attended the T20 Women's World Cup final at the MCG on Sunday 8 March night has tested positive for coronavirus