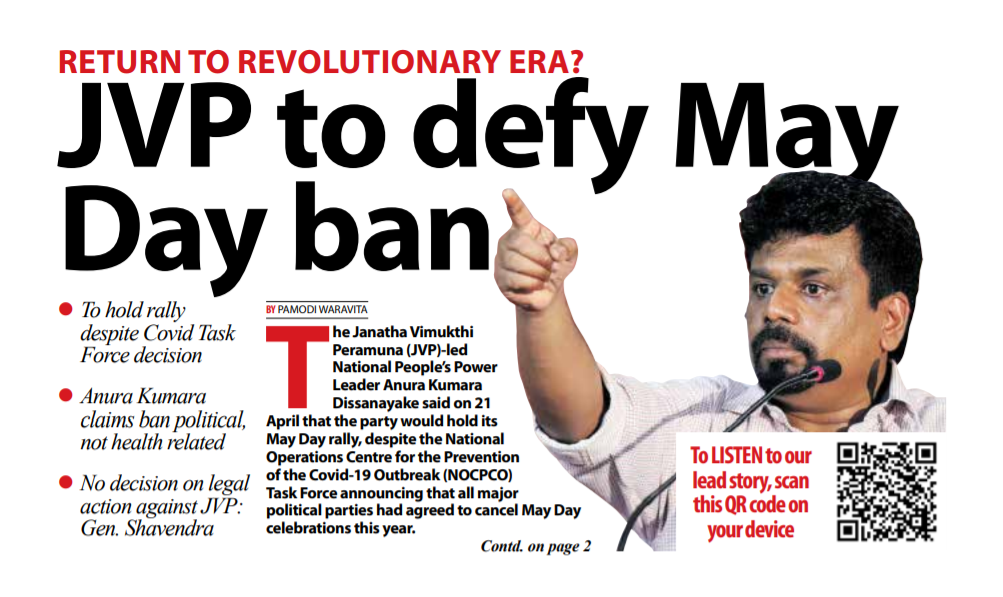 JVP to defy May Day ban

The Janatha Vimukthi Peramuna (JVP)-led National People’s Power Leader Anura Kumara Dissanayake said on 21 April that the party would hold its May Day rally, despite the National Operations Centre for the Prevention of the Covid-19 Outbreak (NOCPCO) Task Force announcing that all major political parties had agreed to cancel May Day celebrations this year.


“We are definitely holding the May Day rally. On 20 April morning, the NOCPCO Task Force called us in for a meeting to discuss the health guidelines to hold the May Day rallies. A representative from our party participated and informed them about the necessary health measures we would be taking. Although the Head of the NOCPCO and Army Commander, General Shavendra Silva said that all parties have consented to cancel the May Day rallies, we did no such thing at this meeting,” said Dissanayake.


Hinting at a return to the JVP’s famous “revolutionary” era and recalling the ban on May Day rallies in the 1980s, Dissanayake said that a ban by then President J.R. Jayawardene did not stop the JVP from holding their rally.


“It would not stop us this year either,” added Dissanayake.


He further said that the decision to cancel the May Day rallies was a matter of politics, and not that of health.


“On 19 April, we even had a discussion with the relevant Deputy Inspector General of Police to allocate our location for the May Day rally. This sudden decision to cancel all rallies by the Task Force is not because of health reasons. The ruling Sri Lanka Podujana Peramuna (SLPP) party is afraid that the divisions within its faction would be shown to the society on that day which is why the Task Force is utilised to cancel all rallies,” he said.


Dissanayake pointed out that prior to the decision to cancel May Day rallies, former President and incumbent MP Maithripala Sirisena, who is the Chairman of the Sri Lanka Freedom Party (SLFP), which is a coalition party of the Government, had announced that it would hold its own May Day rally, instead of joining hands with the SLPP for its celebration.


“Similarly, there are others within the ruling faction who are reluctant to get onto a SLPP stage now for fear of being booed off of it,” added Dissanayake.


According to Dissanayake, the Sinhala and Tamil New Year season commenced as normal just last week, where shops and pilgrimage sites were crowded. He also said that people have resumed their normal lives now, with public transport functioning at normal capacity, with no social distancing.


Dissanayake stressed that the rights of the working class should not be violated by cancelling the May Day rallies.


However, Gen. Silva told The Morning yesterday (22) that a meeting with all the major political parties had been conducted on 19 April to arrive at this “agreement” to cancel all May Day rallies.
“In 10 days, people will see and understand the health situation of this country,” said Gen. Silva.


When inquired as to whether criminal action would be taken against those who hold May Day rallies, Gen. Silva said: “No decision has been reached on the matter yet.”
The May Day celebrations were not held in 2020 either, due to the country being in lockdown following the first wave of the Covid-19 pandemic in April last year.

JVP to defy May Day ban