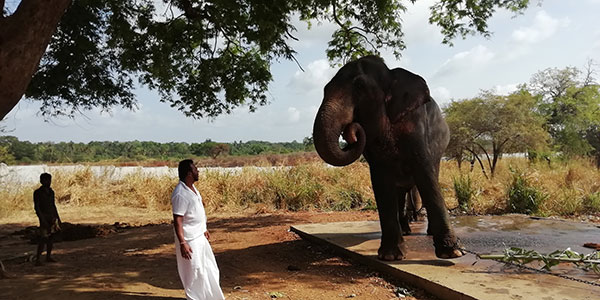 September 6, 2018 by Jennifer Anandanayagam No Comments

A recent news story making its rounds shed some light on the deplorable plight that has befallen Kalana – the elephant of the Vishnu Devale in Devinuwara.

Kalana, who was gifted by President Premadasa in 1988, is currently being cared for in the Ridiyagama Safari Park, following the injuries he suffered over an extended period of neglect at the hands of those decreed to care for him.

Speaking with the Assistant director of Ridiyagama Safari Park, Hemantha Samarasekara, we found out that Kalana’s wounds are currently being tended to twice a day and even his most prominent wound, on his front right leg, is seeing some progress.

Kalana’s veterinarian Dr. Nandana Perera stated that he is likely to fully recover within two – three weeks’ time and he further highlighted the reason for the extensive nature of Kalana’s injuries,

“The animal was in heat and usually when this is the case, it is near impossible to get close to them which is why, according to the mahout, the chains were not loosened and changed, leading to the continued aggravation.”

However, Dr. Perera provided that it is generally the responsibility of the caretakers to inform the relevant authorities if they are unable to tame the animal enough to provide it necessary care; this procedure was not properly followed through.

Kalana’s situation has sparked discussion about the state of domesticated elephants, particularly those housed for cultural purposes.

About the care afforded to domesticated elephants, Dr. Perera said,

“Personally, I believe that this is an isolated incident as I can give a great example of the elephant Haritha in Deniyaya whose caretaker is extremely alert and is most concerned about the elephant’s care.”

He went on to say that he sees no grave issue in the animals being used for cultural purposes so long as they are given the attention they need.

Deputy Director of the Department of National Zoological Gardens, Renuka Bandaranayake was also of a similar opinion,

“Events such as the Esala and Dalada Perahera have been a part of our culture for centuries and while such environments are not ideal for animals, the most important thing is that they are given the necessary care.”

However, Samarasekara of Ridiyagama Safari Park said that while he too wishes not to point fingers at those who employ elephants for cultural and religious purposes, elephants are complex social creatures and in this case, the case of Kalana came to be because he was in heat.  Samarasekara believes that elephants, like all other living creatures, should be allowed their basic needs.

“These animals held in captivity often do not get the opportunity to socialise, particularly to bond and find a sexual partner or mate” which can lead to aggravation and as we seen here, resulting in injury to the animal.

It is evident that many experts are rather unwilling to comment on the issue of domesticated elephants and their role in the cultural and religious sphere within the island; understandably so, as it is a controversial topic of discussion and is a sensitive issue with no real systems in place.

Regardless, Ven. Pahiyangala Ananda Sagara Thero, Chairman of Protect Sri Lanka was adamant in stating that this practice of using elephants in this manner for the perahara and as religious and cultural attractions is in actuality, against Buddhism and its principles of kindness and compassion. In the case of Kalana, he further said that, regardless of what documentation may exist, the elephant absolutely should not be returned to the Vishnu Devale in Devinuwara.

“When you witness Kalana reaching for his kin, seeking companionship despite his grave injuries, could anyone continue to subject this animal to such a fate?”

He further added that religion does not in any way, shape or form, dictate that animals should be used in such a way for religious purposes.

However, Hon. Thero went on to say that activists do not demand that these elephants be removed from the perahara and from these religious institutions entirely, but merely that they be treated with the diligent care they deserve.

He moreover noted that what needs to be stopped is the relocation and callous treatment of these animals in the name of culture.

Fashion with a confrontational message

Beyond drapes and looms

April 9, 2019 bythemorninglk No Comments
An event occasioning the work that goes into the sophisticated designs of drapes and looms took place on 31 March at Hype Studio, Colombo.