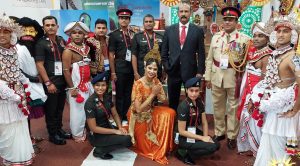 A delegation of the Ministry of Defence, headed by the Defence Secretary, General (Rtd.) Kamal Gunaratne visited Moscow in Russia, to attend the International military-technical Forum ‘Army-2021’ and International Army Games, from 20-26 August.

There had been three teams representing Sri Lanka this year, the Embassy of Sri Lanka said in a media release on 31 August.

The delegation also attended the opening ceremony of the Forum and the Games, inaugurated by the President of the Russian Federation Vladimir Putin on 23 August.

Defence Secretary Gunaratne also visited the House of Friendship where there was an exhibition to promote Sri Lankan traditions and culture among the visitors of both the above events.

September 3, 2018 byRevatha No Comments
Losing in the Bronze Medal match against Korea on Saturday meant Sri Lanka finishes her only fourth Asiad sans a single medal!