The first unofficial Test cricket encounter had been played here at the historic Bogambara Grounds. That was after the game of cricket was first introduced to Ceylon, as Sri Lanka was named then, when the island had been colonised by the British.

According to well-documented history, the first cricket match in Ceylon had taken place in 1832. The entire sea belt as well as the central hills of the island had come under the colonial rule by then. In October 1832, a first cricket club had been formed in Ceylon, named the Colombo Cricket Club (CCC). Ivo Bligh’s famous England team had played an odd game in Colombo en route to Australia, where they famously “recovered the Ashes”.

In 1888-89, an English team led by George Vernon toured both Ceylon and our neighboring India. They played a game against All-Ceylon in Kandy too that time, again at the Bogambara. In 1890, the Australian team on their way to England also played in Ceylon, yet this time in Colombo. By then, first-class cricket in the island had become famous due to the influence of the British and those touring teams. 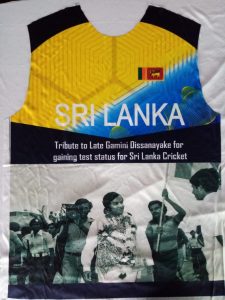 After a long and arduous journey, Sri Lanka got ICC Test status on 21 July 1981. Here is the then Cricket Board President the late Gamini Dissanayake is welcomed at the Katunayake Airport by fans and dignitaries, including cheerleader Percy Abeysekera, when the former returned with the happy news from England, as is depicted in a T-shirt the cheerleader is preparing to wear in future international matches to be played in the country Photo ACL Cables

The Marylebone Cricket Club (MCC) teams had visited here on no less than 23 occasions that period. Other teams who visited from England were under Sir Julien Cahn (1936-37), and D.H. Robins (1977-78). Notably, the English and Australian teams used Ceylon as a stopover then and played cricket which they called “whistle-stop” games. Douglas Jardine’s infamous “bodyline team” too was here in 1932-33.

New Zealand made a trip here in 1937. Then, Ceylon made 227/8 with De Saram top-scoring with a 90. Douglas Jayasinghe was the first man from the Southern Province to play for All Ceylon that time. He was an opening batsman. S. Saravanamuttu was the Ceylonese Skipper.

In the immediate aftermath of World War II, in 1945-46, came an Australian Services Cricket Team to both Ceylon and India. It featured legendary Keith Miller. He scored a century in Colombo in that tour.

In April 1945, the Indian national team visited Ceylon and played one first-class match at the P. Sara Oval. The match ended in a draw due to bad weather. The India team was a strong one led by Vijay Merchant. It had players like Shute Banerjee, Mushtaq Ali, Lala Amarnath, Vijay Hazare, and Rusi Modi.

In 1956-57, India again visited Ceylon and played two international matches versus Ceylon at the P. Sara. The two matches ended in a draw to the credit of Ceylon. The Indians were led by legendary Polly Umrigar and included many leading players such as Nari Contractor, Subhash Gupte, Pankaj Roy, A.G. Kripal Singh, and Vijay Manjrekar.

In 1965 Ceylon became the International Cricket Council (ICC) Associate Member. Occasionally, teams representing Ceylon played matches abroad, especially in India. From 1953-54 until 1975-76, the Ceylon Cricket Association played regular matches against Madras, now Chennai, for the popular Gopalan Trophy. This annual fixture was played in either Colombo and Madras.
It was not until 1969-70 that another Australian team landed in Ceylon. This team played one game against the islanders before going to India for a five-Test series. Ceylon was renamed Sri Lanka only in 1972 under the Sirimavo Bandaranaike Govt. In 1973-74, India toured here again and played two first-class as well as two limited-over matches, this time against Sri Lanka.

Sri Lanka won the ICC Trophy for the Associate Members in 1979 in England, during the Cricket World Cup in England that year, and on 21 July, 1981, the fascinating journey of the island nation in cricket reached a landmark by achieving the much-anticipated Test status. What happened thereafter is, they say, history!

October 4, 2018 byMalik No Comments
Lionel Messi produced a Wembley masterpiece to condemn Tottenham to their second successive Champions League defeat as they were beaten by Barcelona at Wembley.