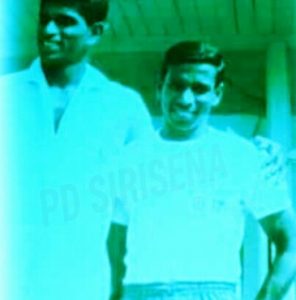 As we have discussed in these spaces earlier too, Kandy has produced iconic sports persons who had excelled at the highest level in the country. If you talk about football, the name Mahinda Aluwihare comes to mind instantly. A true Kandy sporting legend!

Aluvihare is a proud product of St. Sylvester’s College here in Kandy. The stalwart of the 1950s had enjoyed an uninterrupted stay at the top spot in soccer for a long while particularly in the 1960s. His overwhelming debut as a professional footballer quickly resulted in having a place in the national team.

He was quick, strong and was also a sound “header” of the ball. A prolific dribbler of the ball, Aluvihare possessed a powerful “both-leg” strike with utmost sharpness and agility.

It was at St. Sylvester’s that “Alu” played his football first. Later he played for the Kandy Schools and also Combined Schools. While he was still being at school, Mahinda played for Young Wanders SC at Katukele. He later went on to represent Kandy, the Up-Country, and eventually All-Ceylon.

Debuting for Ceylon in 1961

In 1961, he joined the Royal Ceylon Air Force and there too he continued to excel in football as well as athletics, basketball, and boxing. A strongly built six-footer, Aluvihare was famous for his long kicks and his profound leadership qualities too.

In that very same year in 1961, he got the opportunity of playing for the country under another famed Kandy product, C.S. Fernando and some others who played with him were none other than an ultimate football legend of the country, P.D. Sirisena. The others were B. Sourjha, M.M. Hashimdeen, Piyadasa Perera, A. Ignatius, A. Vandergert, S.M. Noor, and W.S. Boteju.

He led the Air Force team in 1966 at the inter-services tournament. He also toured with the Ceylon national team for the Agha Khan Gold Cup football tournament in Dacca. He also played in the European tour that happened in 1968.

Aluvihare’s most memorable performance came up in 1968, the year the leadership of the Sri Lanka team was bestowed on him. That year, Sri Lanka had a rare European tour. On that tour, his teammates were S.P. de Sylva, A. Zainulabdeen, Tuan Amidon, S.M. Noor, M.A. Fernando, P.H.S. Albert, P.D. Sirisena, M Hazmath, M.A. Ameer, Lionel Peries, and M.M. Hasimdeen.

Mahinda Aluwihare made his school St. Sylvester’s, the two clubs Young Wanders SC and Air Force SC in Kandy and also the country proud. A person of Mahinda Aluwihare’s calibre will not be forgotten in the field of football for a long time.

After leaving the Air Force, he joined the Bank of Ceylon and at one time, he gave a big hand for Kandy football and also to his school. He was heavily involved with St. Sylvester’s old boys’ association where he was once the secretary.

Aluwihara was ever lauded by the pundits of the game as one of the finest centre-halves the country has ever produced in the known history of football. He was living very close to the residence of the present writer at Poonawatte in Kandy where he later passed away.

I still remember Aluvihare used to say that in the good old days the standard of outstation football was such that they never played second fiddle to any star-studded Colombo club. The soccer clubs from Badulla, Jaffna, Kandy, Galle, and Trincomalee etc. had taken the upper hand against any Colombo club quite graphically portraying the fact that the talent is oozing in the far off corners of this island.

October 20, 2019 byThe Sunday Morning No Comments
Susanthika Jayasinghe, 43 now, is the first and only Asian sprinter to win an Olympic medal.

October 11, 2018 byRevatha No Comments
Pakistan probably has Khawaja as the main hindrance on their way to victory against the Aussies.