Kane out of second Test vs. England that starts today 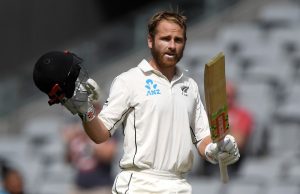 The Kiwis are confident that Williamson, the world’s No. 1 Test batsman, will be fit to play in the WTC final

New Zealand Captain Kane Williamson will miss the second and final Test against England at Edgbaston to rest his troublesome left elbow.

The 30-year-old missed the Black Caps’ ODI series against Bangladesh in March with the same issue. Opening batsman Tom Latham will captain the tourists in Williamson’s absence.

Will Young will come into the side to bat at No. 3 with pace bowler Trent Boult also expected to return for the game, which starts today (10).

Left-armer Boult only arrived in the UK on Friday (4) during the drawn first Test at Lord’s with New Zealand Coach Gary Stead saying before the series that he did not expect Boult to feature against England.

However, the Kiwis look likely to rotate their pace attack as they prepare for the World Test Championship (WTC) final against India in Southampton next week. Left-arm spinner Mitchell Santner will miss out after sustaining a cut to his left index finger during the first Test.

The Kiwis are confident that Williamson, the world’s No. 1 Test batsman, will be fit to play in the WTC final.

May 2, 2022 byNews Admin No Comments
Bangladesh have added Mosaddek Hossain to their squad for the first Test against Sri Lanka (SL) starting on 15 May at the Zahur Ahmed Chowdhury Stadium in Chattogram.

March 31, 2021 byRevatha No Comments
Seniors cold-shouldered in the domestic tournament