In order to commemorate Earth Day (22 April), two people with a deep passion for nature got together to discuss a range of topics related to the Earth, specifically in relation to nature in Sri Lanka and how we must appreciate it deeply. Kapila Rasnayaka and Otara Gunewardene had a discussion via Instagram Live on 24 April.

Rasnayaka in all his humility was thrilled to be in the presence of one of Sri Lanka’s biggest nature advocates and expressed how those of his generation and other young people have been given a great example through Otara’s activism and service towards protecting Sri Lanka’s environment. Otara expressed that she always felt it was her duty to do so and that even as a child, she always felt close to nature.

She shared that rather than focusing completely on her studies, as a child, she was always fond of playing outside in the mud and grass with all the trees and the childhood playthings only mother nature could offer. Both she and Rasnayaka expressed that it is important to stay connected to nature in this manner. 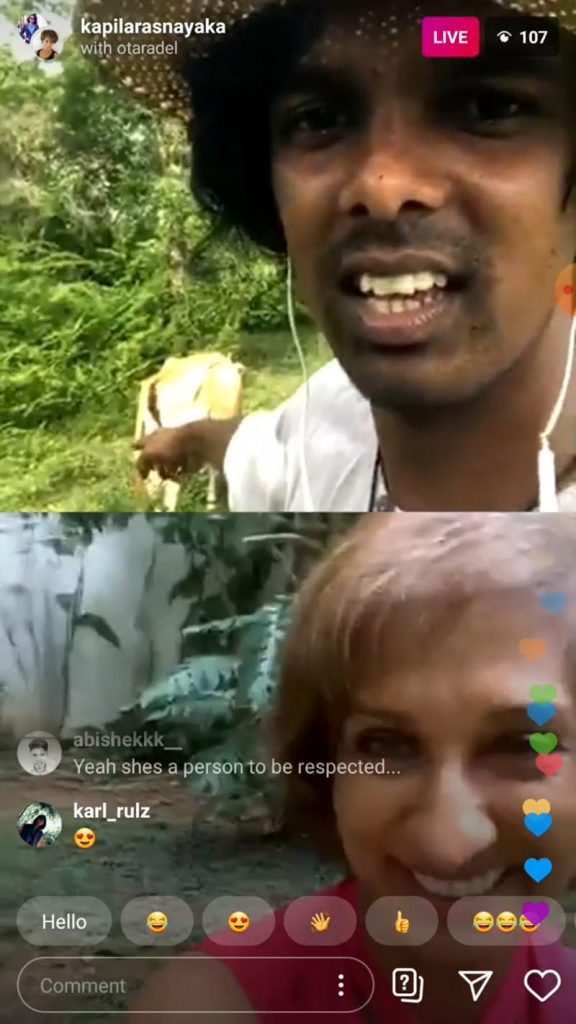 They spoke about the current pandemic we are facing and cited behaviours such as the loss of connection with nature and humanity being wholly engrossed in artificial things as causes of this great tragedy. They also spoke about how if we don’t make that connection with nature right now, this could be just the beginning of many more greater manmade crises to come. They attempted to inspire change in the ways of people; instead of sticking to a rigid schedule, at least now during this time, focus on coming together with nature.

Otara reflected sadly that at present, especially in Sri Lanka, our children have forgotten what it’s like to be taken care of by nature. The two spoke about how parents in the present day do not allow their children to play in the dirt and grass because they find it too dirty and think that it would be harmful to children’s health.

Rasnayaka recalled how as Sri Lankans, we traditionally have a very special way of enjoying nature by eating fruits and vegetables by hand. He spoke of how he experienced the wonder of this when he saw the look of amazement on one of his German colleagues’ faces as a result of how the fruits felt in his hands.

Otara agreed that being truly intimate with nature is something we used to do, such as walking barefoot on the grass, but that has now been categorised by people as “dirty” habits. They spoke about how Sri Lanka has changed from a nature-loving nation to a nature-loathing nation as a result of us trying to do what is “posh” and staying indoors in an air-conditioned room.

They also acknowledged the fact that it is indeed sometimes unhealthy for people at present to be outside because of all the pollution. Children can no longer play in the dirt, because now, Sri Lankans have the terrible habit of littering everywhere they go – a problem they recognised as being largely prevalent in highly populated areas such as Colombo.

Rasnayaka spoke of how he has noticed that in Thailand, people were actually starting to work towards a self-sufficient economy, and the two agreed on how wonderful that would be for Sri Lanka.

They then showed everyone their gardens and spoke about all the exotic, tropical fruits they grew for themselves. They spoke about how this is a very real possibility in Sri Lanka as a whole, with our country being such a natural marvel.

A new member joined the discussion in the form of a nearby cow who began to voice its own thoughts and concerns from Rasnayaka’s end. Otara’s absolute delight in animals was very visible when she lit up at the sight of the creature and spoke fondly of her two cows, who she saved from the slaughterhouse.

She admired Rasnayaka’s surroundings as he was seen in a large, forest-like area; he jokingly called it Colombo 77. Otara delightfully declared that Colombo 77 is far more beautiful than Colombo 7.

After providing their viewers much food for thought, the greatest one being that even though we are stuck inside, nature isn’t, and therefore, we must show it our gratitude and learn to become one with it once again, the two ended the discussion.

Say I do with Cinnamon City Weddings

Painting is a physical response of my body, my spirit, my chi: Gregory Burns