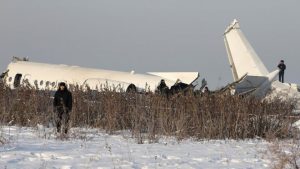 A plane with 100 people on board has crashed in Kazakhstan, killing at least nine people, officials say.

They say the Bek Air aircraft went down shortly after taking off at Almaty airport on Friday morning local time.

A Reuters reporter close to the scene said there was heavy fog in the area. The airport said there were survivors.

The plane was en route from Almaty, Kazakhstan’s largest city, to the country’s capital of Nur-Sultan. The cause of the crash is not known.

Almaty’s airport said there were 95 passengers and five crew on board.

It said the plane lost height at 07:22 local time (01:22 GMT), before striking a concrete barrier and crashing into a two-storey building.

There was no fire upon impact.

Footage has emerged of rescuers working at the scene. In it, a woman can be heard calling for an ambulance and the cockpit of the plane is seen wedged into the side of the building.

A special commission will be set up to determine the cause of the crash.

This is not the first serious plane crash in the city – on 29 January 2013, a passenger plane travelling from the northern town of Kokshetau came down near Almaty, killing 20 people.

A month earlier, 27 people died when a military plane carrying senior Kazakh security officials crashed in the south of the country.BBC