Kishu Gomes resigns ahead of election 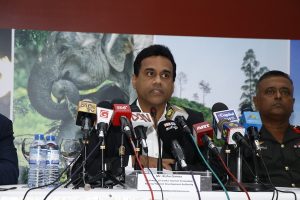 Sri Lanka Tourism Promotion Bureau Chairman Kishu Gomes announced today (14) that he has submitted his resignation to Minister of Tourism John Amaratunga effective 15th of November to allow the newly elected President to appoint a new Chairman following the election this weekend.

However, when The Sunday Morning Business contacted Minister Amaratunga for comment he said that he had not accepted the resignation as he had only been told that a letter had been sent but had not seen it yet.

Originally from the corporate sector, most prominently as Managing Director and Chief Executive Officer Chevron Lubricants Lanka, Gomes was in the tourism industry for just over 9 months, originally as the Chairman of both the Sri Lanka Tourism Development Authority and the SLTPB, and thereafter the SLTPB alone.

Early this year Gomes received an invitation from the tourism industry to accept the position of Chairman SLTPB which was approved by President Maithripala Sirisena. However, Prime Minister Ranil Wickremesinghe, having reviewed the appointments approved by the President, decided to make Gomes the Chairman of both SLTDA and SLTPB.

However following the Easter attacks Gomes announced in a press release that he would step down from his position at SLTDA “in order to focus on re-building Sri Lanka’s tourism brand in his role as Chairman of SLTPB”.

In a statement today (14) Gomes spoke about the role played by the SLTPB following the shock of the Easter bombings.

“With the Easter attack shattering the hopes of the tourism industry with 42 foreigners dying and over 200 foreigners getting injured with the terrorist attack on the three 5 star hotels, Kishu took the lead in responding to the challenge covering all stakeholders of the industry locally and globally by quickly appointing an Emergency Response Team combining the two organizations that successfully accomplished all fundamental tasks in assessing, defining and providing solutions to the issue liaising with the private and public agencies here and abroad including the 3 Armed forces and the Police,” the press release said.

It added that Gomes travelled to Dubai to take part in the Arabian Travel Mart just a few days after the incident where he faced almost all the leading global media organizations including CNN to effectively lay the foundation for the industry recovery with a few bold statements that received highest accolades.

By end October the tourism industry had recovered up to 80% just in 6 months reviving hopes of early recovery as compared to the time taken by other countries in similar situations.

January 11, 2021 byRusiru Keppetipola No Comments
By the end of the first week of the new year, the Colombo Stock Exchange (CSE) had recorded a net foreign outflow (NFO) of Rs. 964.65 million, with Rs. 1.52 billion worth foreign sales being reported.

Investing in innovation: Why organisations shouldn’t hold back during a crisis

August 20, 2021 byNews Admin No Comments
Crises can often lead to significant changes in almost every operational aspect of life. The ongoing global Covid-19 pandemic is a fitting example of how profound disruption can be. Many industries an