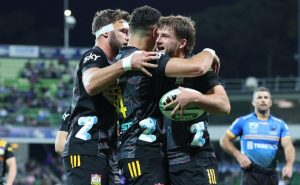 Chiefs with a thrilling win over Western Force in Melbourne

The first week of Trans-Tasman Super Rugby season concluded with Kiwi teams getting the better of the Aussies in all five games.

Crusaders hold on to narrow win over the Brumbies

The Brumbies almost earned themselves a draw as the Crusaders held on to a 31-29 win at Christchurch. The hosts started well, with some early pressure. After a few phases, they created an overlap on the outside for flanker Ethan Blackadder to touch down in the corner.

After a quiet period, Brumbies centre Irae Simone intercepted a Crusaders’ pass and almost ran all the way for a try. Crusaders tracked back but ended up conceding a penalty and the Brumbies found the opening as Scott Sio pushed his way over the line. Noah Lolesio bisected the uprights as the visitors took a 7-5 lead.

Crusaders immediately bounced back with a brilliant individual try from fly-half Richie Mo’unga. Their third try came through a timely interception from David Havili who snatched Ryan Lonergan’s pass before running all the way for the try.

The second half started with Irae Simone picking the ball up from the back of the ruck and jumped over for the try to put Brumbies back in the game. They kept possession and Lolesio reduced the deficit to just two points with a penalty, before the hour mark, to put the game in the balance. The Crusaders’ fourth and fifth tries came through Brendon O’Connor who scored from a powerful rolling maul and Cullen Grace who latched onto Ereatara Enari’s flat pass and touched down near the posts.

Time was running out but the Brumbies found the whitewash with nine minutes remaining when Tom Banks broke through and Lolesio added the extras to bring them back to within seven. Crusaders were down to 14 when Enari was sent to the bin for repeated infringements. The visitors used the advantage and found another try when Rob Valetini touched down in the corner. Lolesio was given the chance to earn a draw with a tough kick right near the touchline. Unfortunately for the Aussie camp, Lolesio’s sailed just wide to break Aussie hearts.

Blues thrash Rebels go on top of the table

Blues handed a six-try drubbing to the Rebels in a 50-3 win in Melbourne on Saturday (16).

The Blues started their scoring through a successful penalty from Otere Black. Three minutes later, the Rebels levelled matters with a penalty from Matt Toomua, which ended up being their only points for the match. Blues took matters to their own hands as they earned three back-to-back penalties which were converted by Otere Black.

The opening try for the Blues came just before half-time. Captain Tom Robinson shrugged off a tackle to jump over for the try. The conversion was missed and the visitors took a 17-3 lead before lemons.

The second half saw the Kiwis running riot. Their second and third tries were scored by Hoskins Sotutu who showed his power as he crashed over on both occasions. Akira Ioane showed his skills on foot as he stepped away and ran over the touchline for their fourth try. The fifth try was set by Plummer who produced a cross-field kick which fell perfectly for AJ Lam who just had to stroll over for a try.

The visitors reached the half-century after a Rebels line-out error which handed Ioane his hat-trick try and a big win for the Auckland team.

Western Force missed the last-minute conversion as Chiefs secured a 20-19 win to complete the clean sweep for Kiwis in Perth. The visitors made the perfect start to the contest when centre Alex Nankivell went over for the first try of the game. Soon they were down to 14 men when Anton Lienert-Brown was given a yellow card after his team had been warned for repeated infringements.

The Hosts took full advantage and a strong driving maul that the Chiefs stopped illegally saw a penalty try awarded by the referee and Jacobson given the marching orders. However, the Chiefs hit back with 13 men as they took a three-point lead into the break when fly-half Damian McKenzie struck a successful penalty.

Chiefs walked out after the break with 13 men but they did a good job in the defence until they were back to 15. Few moments later, the Western Force was reduced to 14 when their winger Jordan Olowofela was sent to the sin bin in the 53rd minute after a deliberate knock-down.

The Chiefs took the one-man advantage and scored two tries within five minutes. Hooker Nathan Harris went over after a massive driving maul and then wing Jonah Lowe jumped over after Pita Gus Sowakula broke the line and offloaded.

With 15 minutes remaining, Jacobson was shown his second yellow card, followed by a red card, after he was found slowing down the ball in a ruck. Moments later, Force winger Richard Kahui went over and Miotti converted, cutting down the deficit to six points with ten minutes remaining on the clock. They kept the pressure and Miotti found the whitewash after the hooter went off for a full time. Unfortunately, he could not find the target with the conversion that would have given his team a win.

May 8, 2021 byRevatha No Comments
Pakistan begin second test against Zimbabwe in Harare