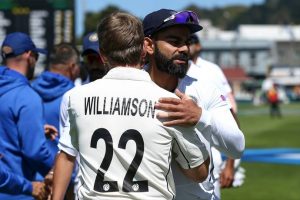 This overtaking of India is taking place just four days before New Zealand’s meeting with India in the inaugural edition of the World Test Championship (WTC) final, beginning on Friday, 18 June

The Kiwis’ 1-0 series win against England yesterday (13), after a commanding eight-wicket victory in Edgbaston to win their first Test series in the country since 1999, helped the Blackcaps to claim the No.1 spot in the International Cricket Council (ICC) Test team rankings over India.

This overtaking of India is taking place just four days before New Zealand’s meeting with India in the inaugural edition of the World Test Championship (WTC) final, beginning on Friday, 18 June.

Featuring nine of the 12 Test-playing nations in the first edition, the WTC began on 1 August 2019, during the Ashes Test at Edgbaston, Birmingham.

Over a two-year period, the tournament witnessed a stiff battle for the top two spots with points system changes during the Covid-19 pandemic also playing their part in deciding the top two teams in the tournament.

What are the playing conditions for the WTC Final?

1. India, New Zealand to share title in case of draw or tie.

2. The match will be played using Grade-1 Dukes cricket balls.

3. The final will also see the implementation of the following changes to international playing conditions that came into effect with the ongoing ICC Men’s Cricket World Cup Super League series between Bangladesh and Sri Lanka:

(ii) Player Reviews – The fielding captain or the dismissed batsman may confirm with the Umpire whether a genuine attempt has been made to play the ball prior to deciding whether to initiate a player review for LBW.

(iii) DRS Reviews – For LBW reviews, the height margin of the Wicket Zone has been lifted to the top of the stumps to ensure the same Umpire’s Call margin around the stumps for both height and width.

What time will the WTC Final begin?

Where to watch the WTC Final live?

January 13, 2021 bySarah Hannan No Comments
Playing Test cricket in Galle without fans is like a wedding without the bridegroom! But that will be the case when England meet Sri Lanka tomorrow (14) at the most iconic and picturesque venue...