December 1, 2020 by Naveed Rozais No Comments

A webinar on LGBTQ+ issues by Students For Liberty Sri Lanka

The Students for Liberty Sri Lanka chapter held the third and final session in a series of LGBTQ+ focused webinars on Sunday (29), bringing together an eminent panel of Indian LGBTQ+ advocates and activists to discuss the pride movement in India.

The webinar panel consisted of Supreme Court of India and Lawyers Collective India Senior Advocate and Co-Author of I Am Divine. So Are You Anand Grover, LGBTQ+ rights advocate Jerry Johnson, and Naz Foundation India Trust Founder and Executive Director Anjali Gopalan. 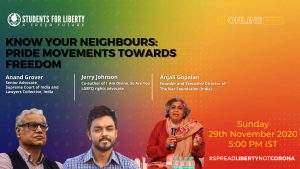 Grover spoke about India’s “fight to decriminalise same-sex relations, explaining that, like Sri Lanka, India had a completely different and inclusive history before the Penal Code and Section 377 (the Indian equivalent of Sri Lanka’s Sections 365 and 365A). Various Hindu texts reference men desiring men, Grover shared, adding that mentions are also made of children being born to same-sex parents. Ancient texts depict overall tolerance and there is an absence of persecution against non-heterosexual people. Further, in India and South Asia, traditional religions considered gender to be fluid. Even the Mughal rulers were tolerant of same-sex relations and gender diversity with the transgender people frequently occupying prominent positions within the Mughal court.

Direct British rule in Indian changed all of this with its legacy of criminalising same-sex relations and the importing and imposing of British law in India. While England completely changed their laws regarding same-sex relations in 1957, many countries in South and Southeast Asia that were once part of the British Empire still follow the laws set down by the British, with no such changes reflected.

Grover shared that the journey to challenge Section 377 of the Indian Penal Code began in 1997 after a landmark case that allowed a person living with HIV to be employed by a government-controlled company on the grounds that discrimination was unlawful as per the Indian Constitution.

Gopalan, whose work with the Naz Foundation India Trust primarily dealt with working with people with HIV before focusing on LGBTQ+ rights, shared that the criminalisation of same-sex relations through Section 377 was the root of a lot of harassment of LGBTQ+ persons, with many LGBTQ+ people suffering from depression because of the stigma they faced.

Gopalan shared that the judgement from the Delhi High Cout made a huge difference, while also noting that while laws change, altitudes don’t change with them; all that has happened now is that same-sex relations have been decriminalised. However, LGBTQ+ people still don’t have the right to marry, to adopt, and to inherit from their partners. There is still lots more to be done.

Johnson spoke about how early Indian and South Asian religions were tolerant of same-sex relations, from Hinduism to Jainism, to Buddhism. Johnson explained that somewhere along the way with invasions and Abrahamic religions taking root in India, India became confused as to what their culture was and what was imported. Johnson also shared that diversity is an important aspect of how to manifest freedom and that each person is a minority of one with each person needing to be able to manifest their diverse experiences and the freedom to live.

The panel shared that when it comes to Sri Lanka, which is still a long way away from decriminalising same-sex relations, there is some merit to the theory that changing discourse and culture is important to change the law, because once the culture is changed, the law tends to catch up, and LGBTQ+ people need to live their lives and change discourse around LGBTQ+ rights through civil spaces that open up.

The “Know Your Neighbours: Pride Movements Towards Freedom” webinar can be viewed in its entirety on the Sri Lanka Students For Liberty Facebook page.

A pilgrimage or picnic?

February 17, 2019 bythemorninglk No Comments
A recent social media post showing the amount of waste disposed at one point of the climb of Adam's Peak this year caught our eye and sparked our concern.

August 3, 2021 byNews Admin No Comments
August 2021 at the Barefoot Gallery Colombo will be defined by the watercolour musings of artist Ranjan Aluwihare capturing idyllic moments from the artist’s travels around Europe, Morocco, and Sri La