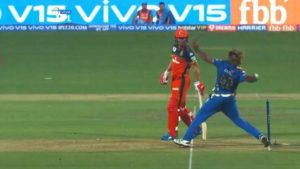 We are playing at IPL level, not club cricket. That’s just a ridiculous call off the last ball – Kohli

Virat Kohli was hugely disappointed after Lasith Malinga escaped with a no-ball off the all-important final delivery of the game as Mumbai Indians beat Royal Challengers Bangalore (RCB) in the Indian Premier League on Thursday, 28 March.

RCB required seven runs from the final ball – a six would have taken it to a super over – but could only manage a single to long-on, which cued celebrations from the Mumbai Indian players before TV replays revealed that the Sri Lankan bowler had overstepped. Had the no-ball been given, RCB would have had the chance to win the game with a maximum.

Speaking after the match, RCB skipper Kohli said: “We are playing at IPL level, not club cricket. That’s just a ridiculous call off the last ball. The umpires should have their eyes open, it was a no-ball by an inch. It’s a completely different game altogether [if there was the extra delivery]. They should have been more sharp and more careful out there.”

Mumbai Indians skipper Rohit Sharma, Kohli’s vice-captain for India, remarked: “Honestly, I just got to know after crossing the rope that it was a no-ball. These kind of mistakes aren’t good for the game.”

After RCB won the toss and elected to bowl, Mumbai Indians posted 187/8 with Rohit top-scoring with a 33-ball 48, while compatriot Yuzvendra Chahal claimed 4-38 with his leg-spin.

RCB’s top order all made contributions, spearheaded by AB de Villiers’ 41-ball 70, but they were ultimately left stranded on 181/5 after the final-ball drama.

November 20, 2020 byRevatha No Comments
Sri Lanka to host Asia Cup next year. It was postponed this year in Sri Lanka due to the pandemic.